With 178 speakers and 70 sessions, KLF promises to be bigger than last year

With 178 speakers and 70 sessions, KLF promises to be bigger than last year 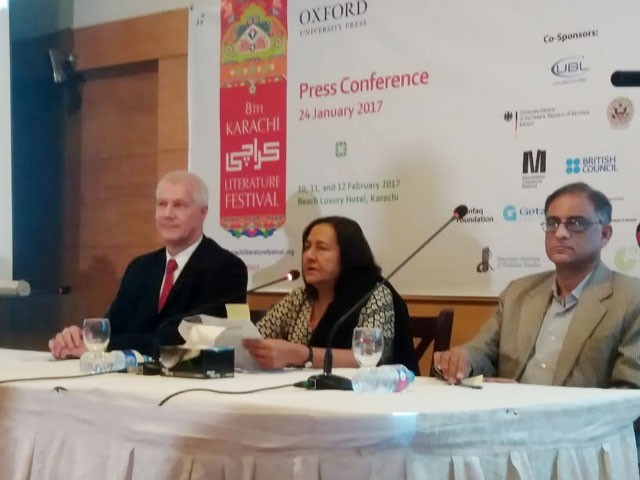 KARACHI: Around 178 speakers from around the world will grace the eighth Karachi Literature Festival (KLF) this year, which will be held in the second week of February.

Addressing a press conference on Wednesday, Ameena Saiyid from Oxford University Press of Pakistan, who is the co-founder of the KLF, announced that historian Ayesha Jalal and Urdu writer Mustansir Hussain Tarar will be the keynote speakers on the inaugural day of the festival, February 10. Meanwhile, Bobby Sager from America and Pakistani author Mohammed Hanif will be delivering their remarks at the closing ceremony of the three-day event, she said.

Eighteen book launches and 70 sessions will be held during the festival, which will be take place at Beach Luxury hotel.

Other than covering topics from Pakistan, the celebrated speakers will cover a variety of topics, such as honour killing, paying homage to Sibte Hasan, and sessions on Karachi, Palestine and Syria, said Saiyid. Roger Long, the biographer of Pakistan’s first Prime Minister Liaquat Ali Khan, and yesteryears film star Shabnum will be coming from Bangladesh for the event, she added.

“This specific literature festival is the mother of all such festivals happening around the world,” said KLF co-founder Asif Aslam Farrukhi. The KLF has triggered many festivals elsewhere, he said. “You will get to see and enjoy various sessions, panel talks, prize awarding ceremonies and meeting authors,” Farrukhi added.

German consul-general in Karachi Rainer Schmiedchen announced that the German Peace Prize Dinner will be held on the opening day for authors and participants.

Guests from Germany, Professor Christina Oesterheld and writer Ilja Trojawon, will attend the event and will launch a textbook for Urdu learners in German medium,” Schmiedchen said.

He added that he will present the first-ever German-Pakistani Graphic Novel at the KLF.

A Book of Conquest: The Chachnama and Muslim Origins in South Asia by Manan Ahmed Asif

The Raj at War by Yasmin Khan

Purifying the Land of the Pure by Farahnaz Ispahani

The Footprints of Partition by Anam Zakaria