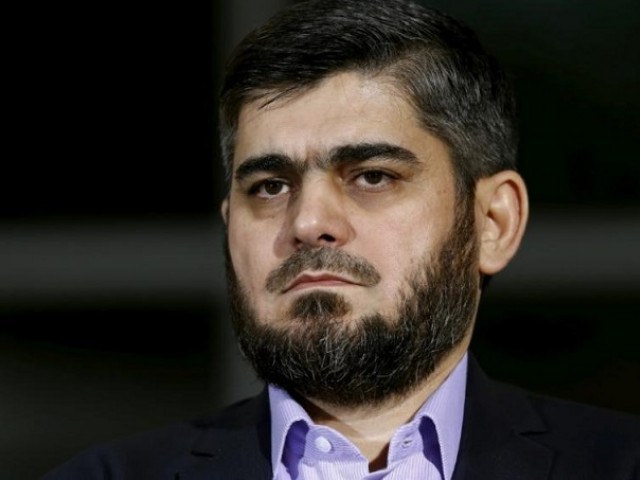 Mohammad Alloush of the Jaish al Islam faction and member of the High Negotiations Committee (HNC) attends a news conference after a meeting with U.N. mediator Staffan de Mistura during Syria Peace talks at the United Nations in Geneva, Switzerland, April 13, 2016. PHOTO: REUTERS

Syrian rebels are set to meet their war-torn country’s government on Monday in the Kazakh capital Astana, in the latest push to end the conflict.

It will be the first time a delegation composed exclusively of rebel groups will negotiate with President Bashar al-Assad’s regime since the war erupted in 2011 with protests against his rule. Set to begin at 0800 GMT, the talks have been welcomed by all parties in the war.

However, delegates from both sides have arrived in Kazakhstan with apparently divergent ideas on the talks’ aims. Rebel groups have said the meeting will focus on bolstering a frail nationwide ceasefire brokered last month by Turkey and Russia.

But Assad has insisted that rebels lay down their arms in exchange for an amnesty deal, and called for a “comprehensive” political solution to a conflict that has killed more than 310,000 and displaced more than half of the country’s population.

Organised by Turkey, Russia and Iran, the talks come a month after the regime recaptured rebel areas of Aleppo, scoring its biggest victory since the war began.

Chief opposition negotiator Mohammad Alloush arrived in Astana on Sunday accompanied by around a dozen rebel figures, including Fares Buyush of the Idlib Army, an AFP correspondent said.

“This is not a replacement for the Geneva process,” Buyush told AFP, referring to the UN-hosted political negotiations set to resume in Geneva next month.

Yehya al-Aridi, a spokesman for the opposition delegation, told AFP there was “no final answer” on whether his team would sit at the same table as the regime. Russia’s special envoy on Syria, Alexander Lavrentiev, told Russian news agencies Sunday that the format of the talks was still under discussion.

A source close to the opposition’s team told AFP that the delegation had been broadened from eight rebel figures to a total of 14, in addition to 21 legal and political advisors.

But state television later quoted him as saying the regime “will participate in any meeting that serves Syrian national reconciliation.”

The talks will be held in Astana’s luxury Rixos President Hotel, where staff members on Sunday were setting up a single large table in a conference room under blue banners bearing the hashtag #AstanaProcess.

Although Ankara and Moscow have backed opposing sides of Syria’s nearly six-year conflict, they have worked hand-in-hand in recent weeks to try to secure an end to the brutal war.

The Astana talks will be a major test of this new partnership. The rapprochement between Russia and Turkey, which saw them conduct their first joint air strikes against IS targets in Syria last week, has come to fill the vacuum left by Washington’s disengagement from the conflict in recent months.

US President Donald Trump’s administration was invited to participate in the talks but did not send a delegation.

Washington will instead be represented by its ambassador to Kazakhstan, the State Department said. France and Britain will also be represented at the ambassador level, according to a European diplomatic source.