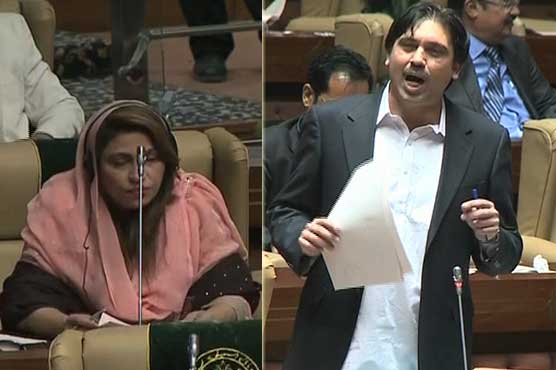 KARACHI: The Sindh Assembly session turned messy on Friday after offensive remarks were made by a male minister against a female MPA from an opposition party.

Though provincial minister Imdad Pitafi’s ‘vulgar’ outburst was expunged by the speaker, opposition members decried the incident and demanded action against Pitafi for his derogatory language.

It all started when deputy speaker Shehla Raza gave the floor to Pitafi, a minister for the works and services department, in the question and answer session. When Pakistan Muslim League – Functional (PML-F) MPA Nusrat Seher Abbasi inquired about private partnership, instead of giving a proper answer, Pitafi said, “It’s rocket science.” His remark left Abbasi as well as members sitting on the treasury and opposition benches staring at Pitafi in shock. Part of this shock could have been due to the minister’s misuse of the popular phrase ‘it’s not rocket science’.

Abbasi asked another question and called Pitafi ‘Mr Rocket’. “I don’t know where the rocket is. Have you seen any rocket with me?” replied Pitafi. He then referred to a TV talk show and said, “I was watching a show and this madam [Abbasi] was talking about romantic weather saying mausam hai aashiqana,” he said.

Deputy speaker Raza intervened. “Avoid using non-parliamentary words”. She had his remarks expunged but the situation spiraled out of control when Abbasi asked the minister to read the questions written in English. Pitafi initially refused to read in English but later taunted her: “Okay drama queen.”  These words created pandemonium in the house and Abbasi, along with PML-Nawaz MPA Sorath Thebo protested the minister’s remarks. Muttahida Qaumi Movement members remained neutral during the session.

“How can I read if she is not listening to me? Please come to my chamber, I will tell you,” he told Abbasi, repeating the same statement multiple times.

“You should invite your mother and sister to your chambers, not me,” said Abbasi. She was in tears decrying the Pakistan Peoples Party’s (PPP) mindset of treating women as lesser beings.

The word ‘chamber’ is famous in the assembly as speaker Agha Siraj Durrani often uses the word in relation to clueless male MPAs who need further explanations. Pitafi made, however, the mistake of applying this word to a female MPA. Deputy speaker Raza tried to calm the situation, reassuring Abbasi and cautioning Pitafi from using such words.

The deputy speaker warned the members to go back to their seats so that she could start the proceedings but the house continued to echo with slogans of ‘Go Nawaz Go’.

PPP MPA Ghulam Qadir Chandio while referring to the Panama scandal, said, “The prime minister and his family have defamed Pakistan in the world; he should step down without any delay”.

Other members were of the opinion that Article 62 and 63 of the Constitution could be applied in the case, as Nawaz is no longer ‘sadiq’ or ‘ameen’ as he gave false statements in the National Assembly. They also criticised PML-N’s Talal Chaudhry for his remarks against Bilawal.

“PPP in its government ruined the country. It is our government which has put Pakistan on the track of prosperity,” defended Thebo. She walked out of the session in protest.