26 to hang for Bangladesh abductions and murders

'He asked for something similar in size and shape... so I made one' 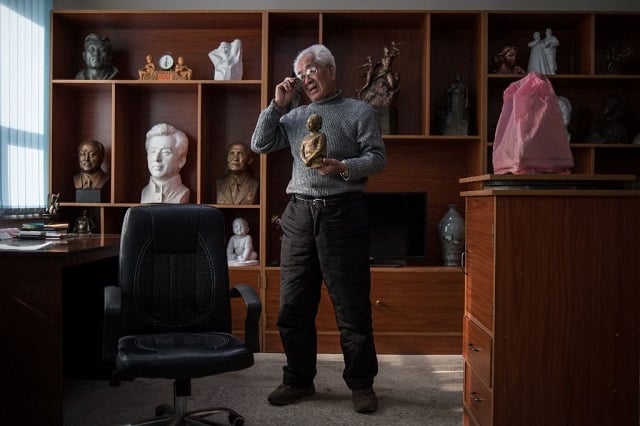 The clause was aimed at a niche but lucrative business - run from Mansudae - of exporting giant memorials mainly to Africa. In a photo taken on November 29, 2016 a bust of Pakistani nuclear scientist AQ Khan is displayed in the studio of sculptor Ro Ik-Hwa at the Mansudae Art Studio complex in Pyongyang. PHOTO: REUTERS


Ro, 77, is among the greatest living practitioners of such works, having been a lead artist behind some of the most iconic of Pyongyang's monuments.

The Khan bust was commissioned after the scientist visited the city's Revolutionary Martyr's Cemetery and admired the large bronze sculptures of individuals commemorated there.

"He asked for something similar in size and shape... so I made one," Ro told AFP during a recent tour of his studio. "After he saw it, he really liked it and sent me a full-length photo and asked for another, so I made a two-metre tall one," he said.

Made to order monuments

Khan's vanity purchase is dwarfed in scale and cost by the monumental multi-million dollar projects Mansudae has worked on overseas - including the 50-meter high African Renaissance Monument, completed in 2010 outside the Senegalese capital Dakar.

"We'll send teams for between one and five years to work on these projects," said Kim Hyon-Hui, manager of the Mansudae Overseas Project (MOP) group.

A day after the latest UN resolution was adopted, the US Treasury added the MOP to its blacklist of entities that "support North Korea's illicit activities".

Ultimate authority over Mansudae technically resides with propaganda chief Kim Ki-Nam. But according to Michael Madden, editor of the website North Korea Leadership Watch, its lucrative status marks it out for special attention from supreme leader Kim Jong-Un.

"Given its prominence as a labour-service contractor and export company, realistic control over its affairs lies with Kim Jong-Un's sister, Kim Yo-Jong," Madden told AFP.

A vice-director in the Propaganda and Agitation Department, Kim Yo-Jong has risen swiftly through the ranks of the North Korean leadership to assume what analysts see as an influential position.

Last week, she was added to the US Treasury Department's blacklist in response to Pyongyang's "serious" censorship activities.

According to Pier Luigi Cecioni, who has operated as Mansudae's official sales representative in the West for the past decade, Mansudae and the MOP enjoy an extremely high degree of autonomy.

"They pretty much exist at the level of a ministry," said Cecioni who sells paintings by Mansudae artists through an English-language website he manages.

African governments have been Mansudae's main market for large-scale projects, with statues, monuments and buildings ordered by countries like Angola, Botswana, Ethiopia, Namibia, Senegal and Zimbabwe.

Kim declined to provide any details of MOP's earnings, and estimates of how much hard currency the company brings in range from $5.0 million to $13 million a year.

"In terms of its revenue earnings, Mansudae is a fairly small player," said Madden.

"Because of its importance and prominence in the country's political culture - not to mention its "supreme" patronage - Mansudae is not hard pressed to earn more," he added.

Mansudae's socialist-realist style has proved popular with revolutionary movements-turned-governments looking to create a post-colonial memorial landscape, and it provides skilled workers at a very competitive price.

"Only the North Koreans could build my statue... I had no money," the then-Senegalese president, Abdoulaye Wade, told the Wall Street Journal when the African Renaissance Monument was completed at a reported cost of $27 million.

Close to 4,000 people work at Mansudae - a vast complex the size of a small village with hundreds of studios housed inside cavernous cement buildings.

It was founded in 1959 by Kim Il-Sung and a giant statue of the founding president and his son and successor Kim Jong-Il - both on horseback - greets visitors inside the main entrance gates.

The studios employ 700 artists who are ranked in a clearly defined hierarchy.

At the top of the pile sit around 30 designated "People's Artists" - like Ro Ik-Hwa - who enjoy numerous benefits including foreign travel and individual studios inside the complex.

The North's art scene is tightly controlled - there is no abstract art, which is regarded as anti-revolutionary by authorities - and even the top artists work for monthly salaries that bear little relation to the sale value of their work.

"We produce pieces that are demanded by revolution... that move people to revolution," said Hong Chun-Ong, 76 - also ranked as a "People's Artist" and a 40-year veteran of Mansudae who specialises in wood cuts and propaganda images.

Hong, described by MOP manager Kim as among the "top five" artists in the country, is one of the few to have travelled overseas - attending promotional exhibitions in Asia, as well as some European countries like the Netherlands.

"We sell works at our exhibitions, but also produce as requested," Kim said.

"Those shown at exhibitions are more expensive because they don't get re-produced," she added.

Provenance can be problematic for those not attuned to the peculiarities of the North Korean art market.

Star artists often produce multiple copies of their most popular works which are also copied by other artists, so that more people can see them.

At the same time, Mansudae cranks out a lot of works specifically tailored for foreign consumption.

This makes finding high quality pieces, with a clear provenance and with genuine roots in the fabric of North Korean society, extremely difficult.

Prices vary enormously, with large works by top People's Artists going for tens, or hundreds of thousands of euros.

"I don't deal much with expensive works like that," said Cecioni.

"The artists involved aren't well known here, so it's difficult to find buyers at that price range."

Mansudae's only bricks and mortar foreign representation is the gallery it operates in Beijing's 798 Art District.

North Korean art remains an extremely niche market, and China is one of the few places where works are bought and sold by collectors with any regularity.

It is possible to buy direct from the complex in Pyongyang, but financial sanctions make it difficult.

"You can't transfer money to North Korea, so if you can't go in person, there aren't that many options," said Cecioni. 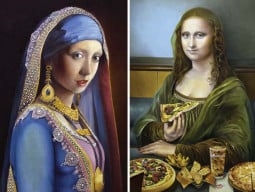 Come one, come all to see the emperor’s new clothes 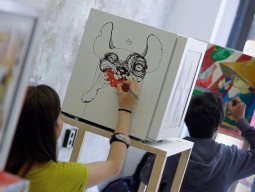 These Pakistani artists painted refrigerators and they look super cool 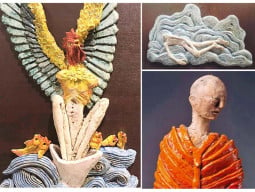 Solo exhibition: Ceramist pours self out through artwork

Aad | 4 years ago | Reply Still he is my hero
Replying to X
Saved ! Your comment will be displayed after the approval.
Error !
Error! Invalid Email.