Around 80 per cent of the world’s energy trade passes throug­h the choke points of this region­
By Dr Zafar Ali
Published: May 27, 2016
Tweet Email 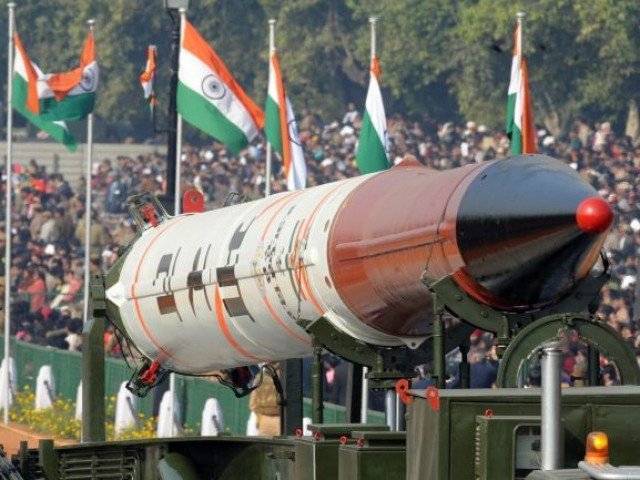 The Indian Ocean is the third largest oceanic division of the world and commands strategically important sea lanes of communication (SLOCs) that link the Middle East, Africa and South Asia with Europe, East Asia and the US. Around 80 per cent of the world’s energy trade passes through the choke points of this region.

India is massively boosting its missile and nuclear capabilities as well as rapidly moving towards fielding an under-sea deterrent. This was demonstrated when it conducted the test launch of the K-4 submarine-launched ballistic missile (SLBM) on March 31 from the indigenously built nuclear-powered submarine, the INS Arihant. Reportedly, the test was conducted with full operational configuration. The missile is capable of carrying nuclear and conventional warheads with a strike range of up to 3,500km and allows India the ability to field an under-sea nuclear deterrent, commonly known as a second strike capability, which provides the capability to absorb the adversary’s first strike and still be able to hit back. The most potent and survivable second strike comes from submerged platforms like the submarine, which operates underwater away from the so-called ‘eye in the sky’ surveillance tools.

Ramping up military modernisation and expanding its naval capabilities are part of India’s push to assert itself as the region’s dominant power, though the country’s political experts club these moves as part of the measures being taken to enhance security against the growing Chinese influence in the region. However, objective analysis would reveal that the projection of China as a threat in the Indian Ocean region has often been exaggerated. It can be argued that China is more focused in the Pacific region and in the South China Sea, and that it lacks the geographical advantage which India enjoys. This notwithstanding, China’s interest would lie in ensuring the security of SLOCs and an uninterrupted trade flow.

The nuclearisation of the Indian Ocean is a serious development, which poses a threat to the security of around 32 littoral states of the region, including Pakistan’s. On the one hand, the US presence and active support to build India’s military and nuclear capacity to counter-balance China’s power is pressuring the regional security environment. On the other hand, India is vying to become the region’s dominant power. The nuclearisation of the Indian Ocean will not only jeopardise maritime security, it will also exacerbate the already fragile strategic balance in South Asia. Pakistan has objected to this development. A statement issued by the Foreign Office states, “The reported Indian tests of a submarine-launched ballistic missile and development of a nuclear submarine fleet are serious developments, which impact the delicate strategic balance of the region. It has resulted in the nuclearisation of the Indian Ocean.”

Projection of military and nuclear power into the seas will grip the region into an arms race and inevitably place it at the risk of a nuclear showdown. It is up to India to de-escalate rather than ignite confrontation at the behest of the US or for self-aggrandisement. The growing Indo-US strategic relationship is largely seen as aimed at counter-balancing China’s rise. However, any likely increase in India’s military and political power may also be seen by Pakistan and other regional countries as a potential threat and thereby stimulate counter strategies. The emerging security dilemma will not only fuel an arms race in South Asia, it will also reinforce China’s perception about the attempts to prevent its rise as a power.

Nuclear strategy experts agree that the operationalisation of a sea-based nuclear deterrent requires an elaborate command and control structure backed by satellite navigation and over-the-horizon communication means to maintain a constant link with the under-sea vessel carrying nuclear weapons. If the communication link with the vessel is disrupted, it could prove to be extremely risky. Since India’s nuclear command and control structure is still evolving, it would, of necessity, pre-delegate the launch authority of a nuclear-tipped missile carried in a submarine thus raising the spectre of a miscalculation and an unauthorised launch. With the advent of a sea-based deterrent, the issues of warhead mating and civilian vs military control would be no more relevant and the command of the nuclear-armed vessel would fall on the shoulders of the local naval commander. Needless to say, this manifests India’s preference for an offensive inclination and may reinforce a tendency for pre-emption with disastrous consequences. Imbued with the perceived protection provided by an anti-ballistic missile shield reinforced by the assured second strike capability, India would adopt a more aggressive posture in its approach towards China and other neighbouring countries of the region, which will be compelled to respond. Although India maintains a ‘no first use’ policy, this is heavily loaded with caveats and exceptions.

Why are NSG berths crucial for nuclear Pakistan, India?

The Indian Ocean is of utmost strategic and economic significance and all nations share the burden to maintain security in this region as a common goal. The situation becomes obdurate in the absence of an institutionalised mechanism of conflict prevention and confidence-building measures to assuage mistrust. The international community has a significant role to play by curbing India’s vertical proliferation of nuclear capabilities and encourage the resumption of dialogue between India and Pakistan. Through a press release issued by the Ministry of Foreign Affairs, Pakistan has declared its intention of highlighting the dangerous implications of India’s plans to nuclearise the Indian Ocean at all relevant international fora. One specific proposal under consideration is to move a resolution in the next session of the General Assembly in September 2016 to declare the Indian Ocean a “nuclear free zone”. The obligation now lies on all the 32 littoral states that straddle the Indian Ocean to co-sponsor this resolution. India is playing a dangerous game in pursuit of achieving the status of a great power and regional hegemon.

A fantastic fear of women