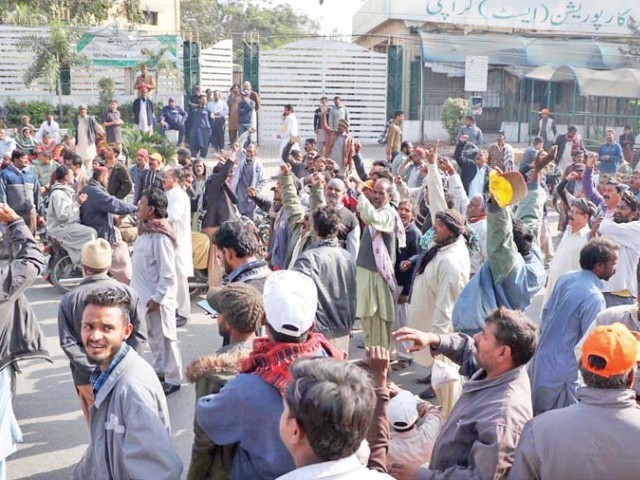 The workers are challenging the government to pay them half the sum it is paying the Chinese company for all the work. PHOTO: ONLINE

KARACHI: Garbage lifting was halted throughout the city on Monday as labourers in all the districts were on strike. The workers were protesting the awarding of a garbage lifting contract to a Chinese company by the Sindh Solid Waste Management Board (SSWMB).

Early Monday morning, labourers of all the six districts of the city gathered at a Karachi Metropolitan Corporation (KMC) workshop on Nishtar Road from where a procession made its way to the SSWMB offices in District Municipal Corporations South and East to mark their protest. The Chinese company, Changyi Kangjie Sanitation Engineering Company, will start lifting garbage in districts South and East by next month.

KMC employees’ union president, Zulfiqar Ali Shah, said that they had formed a local government anti-privatisation committee, which has labourers from all the districts of the city. According to Shah, work that could easily be done by local government employees was being handed over to the provincial government.

In the last six years, he said that funds have deliberately not been issued to the districts and existing garbage collection and lifting machines could not be repaired. Since 1992, he said that no staff has been appointed in the sanitation department. Due to the shortage of funds, he said that the municipalities are unable to pay salaries and pensions to its staffers.

The government has deliberately brought the municipalities to this point so that garbage collection could be transferred to some private company, he claimed. “We will resist any such move,” he vowed, demanding the government give half of the amount being paid to the Chinese firm to the local government workers and they will do their job effectively. “More employees should be hired in the sanitation department,” he said.

If in two days the government does not pay heed to their demands, he said, they will approach the court. Shah also threatened the possibility of a permanent strike in all the city’s districts. For districts South and East, where the contract has already been awarded to the Chinese firm to lift garbage after obtaining approval from their respective councils, he said that their respective chairmen should resign as they have shown their failure to lift garbage in their districts on their own.

Karachi speaks out against increasing disappearances of activists