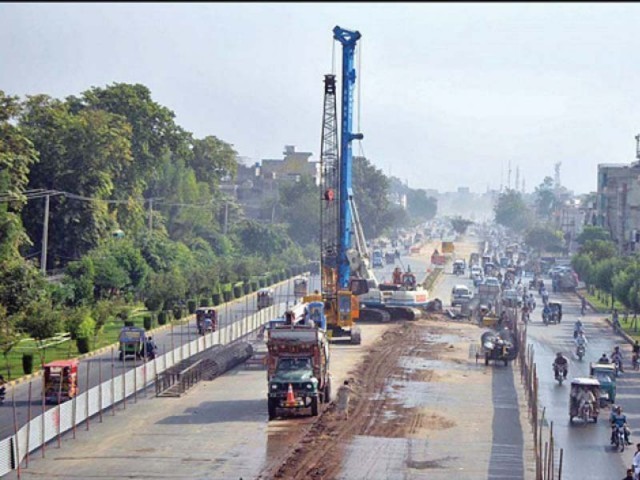 Work on Orange Line is in full swing. PHOTO: FILE

The official said it was a matter of great importance as the metro train was a small component of the multibillion dollar China-Pakistan Economic Corridor (CPEC). He directed authorities to take concrete measures.

CM Shahbaz had reportedly stated that China was impressed with the security provided to its people working in different areas of the country, especially on the CPEC-related projects. Also, outgoing Chinese council general recently praised the Punjab government for making “remarkable security arrangements”.

Addressing the progress review meeting, Hassaan said it was necessary to strengthen security arrangements as these projects are for the country’s own benefit. He asked authorities to revisit security protocols for Chinese engineers and remove apprehensions, if any.

A Traffic Engineering and Transport Planning Agency (TEPA) representative briefed the meeting’s participants about security arrangements. He mentioned that some security related demands of the Chinese contractors were not possible. “Due to space constraints for police or security officials, barracks at some sites cannot allow Chinese people to stay overnight,” TEPA official said.

A Punjab Rangers official said there was no need to worry about the security of foreigners or Pakistani people working at the sites. Rangers, he claimed, have made solid arrangements after conducting detailed surveys of sites along the metro train route.

Considering the security situation in the country, Hassaan asked the Punjab Mass Transit Authority (PMA) and other departments to give serious thought to the proposal of installing baggage scanning machines at all or selected stations of the metro train. The proposal was tabled after a survey of the metro train system in China.

Meeting participants were told that 57% of ground civil works had been completed, including 72.5% of Package-1 (from Dera Gujjaran and Chauburji), 44% of package-2, 56% of package-3 and 55.5% of package-4. It was disclosed that over a dozen buildings in packages 3 and 4 as well as three stretches of 800-metre overhead tracks were ready to be handed over to Chinese contractors to start electrical and mechanical works.

Hassaan directed the new contractor for metro train package-2 (from Chauburju to Ali Town) to fill potholes and remove debris along the under-construction site. “All roads along package-2 should be opened to motorists at the earliest as public facilitation is a priority of the chief minister when it comes to executing development schemes,” he concluded.