What I found by losing Junaid

What I found by losing Junaid 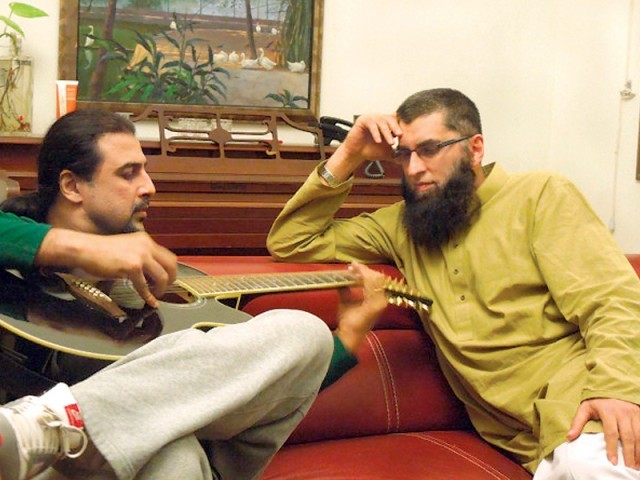 Junaid Jamshed and Salman Ahmad will jam together in Karachi. PHOTO: IMRAN AHMAD

I first saw him more than 30 years ago. Tall, fair, with a Waheed Murad-like KoKo Korina charisma. Even in his early 20s, he was larger than life. We were among the few college students in Lahore who were interested in playing music during General Ziaul Haq’s oppressive dictatorship. To me, he appeared like an oasis in a vast desert. As kindred souls, he and I immediately connected. We bonded over music, cricket, spirituality and our love for Pakistan.

Back then, I could not describe what it was that was so special about him. Today, I know that in a world where pretence sells, my best friend Junaid Jamshed was the real deal.

I was on a flight to New York, while Junaid embarked on that flight from Chitral that was to take him to his final destination. I got the news of his death while I was on the plane. Never have I experienced such ripping waves of pain.

Ever since, I have mourned not just the death of my brother and dearest friend but of someone who loved and served the nation. Pakistan has very few real heroes left. He was needed. And the way he went made his death seem senseless.

Helplessness, despondency and cynicism are addictive. My mind kept going towards what I had read of the pain of separation in Rumi’s poetry for Shams-e-Tabrez. But then, Rumi also is reported to have said that the wound is the place where the light enters.

Memories with Junaid are too many, and are all too precious.

When Dil Dil Pakistan gained fame, Junaid, as always, was the center of attraction. At times, there was an intense rivalry for attention for the fairer sex, although we could not compete with him when it came to girls lining up for autographs.

Even back then, Junaid was like an Islamic history search engine, while I knew much about cricket and classic rock. Over endless and candid conversations, we educated each other, filled up each other’s blind spots, and jointly discovered ourselves. We would also be forever sparring and trying to stump each other in every conversation.

Junaid was the equivalent of a best man at my wedding and the life of the wedding festivities. He even sang a duet with my wife Samina on the Valima, which the guests found either irresistible or shocking. But he never kept the music in his heart hidden; it always found some way to come out.

Bulleh Shah’s words Bullah kee jaanan mein kaun describe the evolution we all undergo. Junaid also was in the process of discovering the hidden layers of his wonderfully multidimensional personality. His transformation was a work in progress. To keep growing and changing is a sign of being alive, and my friend was very much alive.

Yet, some who could not stand his pull on people deliberately misunderstood him, and were quick to judge him as a reactionary, a hypocrite, and even a blasphemer.

Pakistanis generally have a love-hate relationship with their heroes and icons. Junaid was no exception. He was unafraid to voice his beliefs, and was unconventional. Thus, he had to face the darts being thrown at him from both the left and the right. While he never flinched from what he believed to be the right thing to do, it did hurt him deeply when people would deliberately attribute misogynistic remarks to him which he never said, or interpreted his words wrongly. His public apology after the alleged blasphemy charge was his way of transcending conflict and focusing on what was real, positive and tangible.

Junaid Jamshed’s predicament is both the predicament and the very solution of Pakistan. At a time when Pakistanis are questioning their individual and collective identity, he was one of the few who are brave enough to own up to the healthy contradictions that exist in all of us. He showed us that modernity and tradition can coexist, and peacefully so.

His last three years were filled with vitriol from the press, media, religious rivals and even the liberal elite. Yet he continued on in his spiritual mission until he was literally brought down to the ground by the incompetence and negligence of those who are supposed to serve the people.

We spoke before he left for Chitral. He had said to me in his ultra-confident and infinitely optimistic manner that we should continue to work together for good causes. We discussed how we had to raise awareness for polio eradication and to steer the youth away from extremism. He even expressed the desire to continue to support projects like he had done with Naya Pakistan and Chand Sitara, and we discussed him performing live with me in America. That was the last time we ever spoke.

He wanted to see Junoon’s Silver Anniversary successful as something that could potentially raise the morale of Pakistanis.He also urged me to invite Ali Azmat for a Junoon reunion concert tour. When I asked him why the sudden urgency to do so many things simultaneously, he quoted the Beatles lyrics: Life is very short and there’s no time for fussing and fighting my friend.

Junaid’s passing has taught me that we are on earth for a very short period of time. We must utilize our God-given talents and fulfill our purpose on earth. Junaid, at 52, has achieved what many people could not achieve in several lifetimes. His contribution to Pakistani arts and culture, business entrepreneurship his passionate work as a social activist and humanitarian, and his role as a spiritual teacher and guide has touched the lives of millions across the planet.

The best way to carry forward Junaid’s legacy is to follow one’s heart with passion, and not be defeated by failure or society’s ridicule and mean-spiritedness.

I will forever miss his mischievous twinkling eyes, his breath-taking voice and his earnest belief in a peaceful, prosperous and enlightened Pakistan.