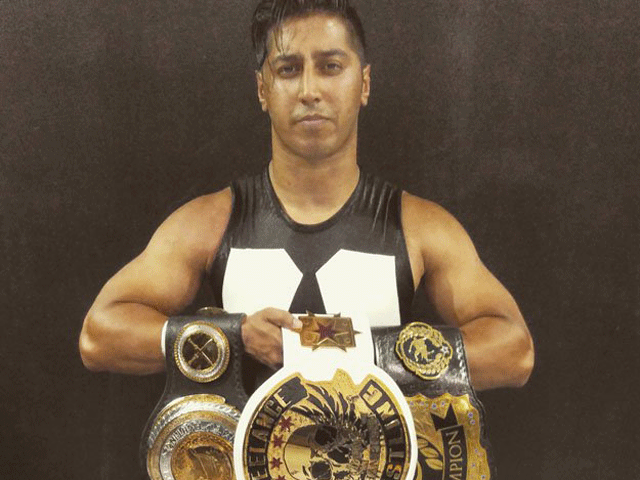 Ali is part of the new show dedicated to cruiser weight wrestlers, 205 Live, said the WWE website. He wrestles on the show alongside some of the best cruiserweight wrestlers such as Japan’s Akira Tozawa, Israel’s Noam Dar, veteran Brian Kendrick and the reigning defending WWE Cruiserweight champion Rich Swann. “Alright, I am done, on to the next chapter. Thank you everyone. You’ll never know what this scene means to me,” Ali tweeted implying his official entry into WWE.

In early December, Ali received farewell from the independent wrestling circuit of Chicago, where he has performed for years. In fact, it was there that he established his name as one of the best all-round performers and ruled the Chicago wrestling scene with amazing performances.

In an earlier interview with The Express Tribune, Ali said, “To wrestle for WWE is such a huge deal to me. It’s what I grew up on. It’s what I chased for 13 years. It’s what I’ve broken bones for. It’s what I’ve missed birthdays for. To be able to live that moment of standing in a WWE ring is … I don’t know how to describe it.”

Now that the dream has come true, it remains to be seen how well Ali fares with the WWE crowd. Three years ago, he had a tryout with the company and was told, despite his wrestling skills, he didn’t look the part. However, the massive success of cruiser weights such as Rey Mysterio and Eddie Guerrero, who have gone to become world champions, means Ali stands a chance at becoming the champion and being in the main event of the grandest stage of them all, Wrestlemania.“If you get in the wrestling business and that is not your goal, you won’t last,” Ali said.

The first WWE Hall of Famer to become president

It is important to note that Ali, so far at least, has not been given a stereotypical gimmick. No turbans or religious associations, just a Pakistani whose actions speak louder than words. In fact, in the promo released by WWE, Ali challenges stereotypes and attempts to break away from them.

“My name Mustafa Ali, and your mind’s already started making assumptions,” says Ali in the video.

“The minute I walk out, I don’t say a word. The crowd hears my name and they boo me out of the building. I’m going to change all of that.”

WWE signing a Pakistani wrestler is surely a dream come true for Ali, as well as many Pakistanis who desired of watching a fellow countryman wrestle on the big stage. But more importantly, it is an interesting business move on WWE’s part.

In 2006, WWE brought an Indian wrestler The Great Khali and pushed him to the moon. Putting him in big matches against the likes of The Undertaker, Kane, John Cena and Batista, and keeping the world championship on, the company expanded their fan base in India. A decade later, it seems that WWE may be pondering over bringing their product to Pakistan.

Here, a large, even though scattered, fan base awaits WWE. Establishing Ali as a star and marketing him to Pakistani audience could bring in a ton of profit for the company. And then, we would be lying if we said we didn’t want an episode of WWE Raw or Smackdown Live to be held at the National Stadium or Expo Center.

So, don’t be surprised if, in the near future, WWE announces their Pakistan tour. It would have been a while in the making.