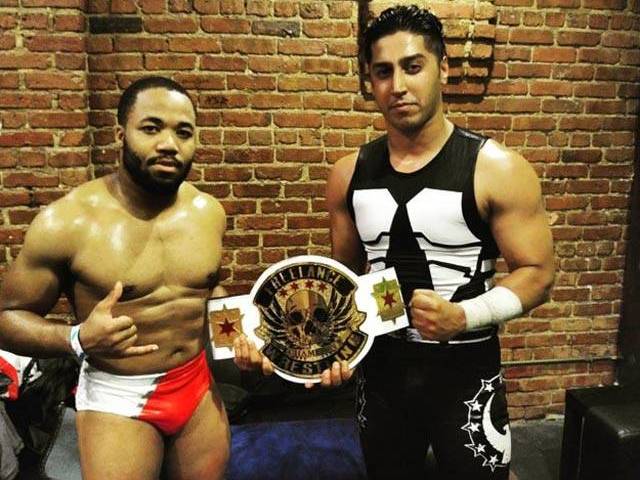 Ali is part of the 32-performer lineup for the show. PHOTO: PUBLICITY

KARACHI: Few millennials in Pakistan can claim that they never came across wrestling while growing up. Back in the day, it was all the rage. However, with time, the mania reduced to only avid wrestling fans that still enjoy this old school, gladiator-reminiscent sport-cum-theatre.

Last year, Pakistani wrestler Baadshah Pehalwan Khan made headlines by applying for WWE Tough Enough, a reality TV competition whose winner earns a WWE contract. With him failing to make the cut, we thought we might never see a Pakistani throw punches at some of the world’s biggest stars of sports entertainment. Enter Prince Mustafa Ali, the first muscleman of Pakistani origin to make it to WWE. Ali is part of the Cruiserweight Classic tournament, which will be aired exclusively on the WWE Network. Born in Chicago, Ali has been in the ring for 13 years now. In an email interview with The Express Tribune, he says, “I knew I wanted to be a wrestler ever since I was young.” Idolising Bret ‘The Hitman’ Hart while growing up, Ali added Eddie Guerrero, Rey Mysterio, Hardy Boyz, Chris Jericho, and Hayabusa to his list of favourites.

To compete in WWE is the ultimate goal for most wrestlers. For Ali, it was not any different. He reveals that he has been in contact with the company for three years. He even had a tryout at their Performance Center in Orlando, Florida, back in 2013. “I was told that I wrestle well, but I don’t look like what they needed at that moment.” Three years later, WWE rolled out Cruiserweight Classic and asked him if he’d be interested.

“To wrestle for WWE is such a huge deal to me. It’s what I grew up on. It’s what I chased for 13 years. It’s what I’ve broken bones for. It’s what I’ve missed birthdays for. To be able to live that moment of standing in a WWE ring is … I don’t know how to describe it,” he says. “Looking the part” has always been an issue in WWE. It was wrestlers like CM Punk and Daniel Bryan who eventually changed the game for independent wrestlers by winning over millions with their incredible skills. With the company giving in to audience’s demands, it is athletes like Ali who will now benefit.

Ali’s ultimate dream is no different from any of his peer’s: winning the WWE championship and being in the main event at Wrestlemania, the Super Bowl of professional wrestling. “If you get in the wrestling business and that is not your goal, you won’t last,” he maintains.

Ali also wants to make a point when it comes to ethnic and racist labels. “I would tell them that labels are what cause all the problems in the world. You’re not black, or white or brown. You’re human.”

Perhaps this idea takes root in his portrayal of a typical foreign bad guy in the independent wrestling circuit. As part of ‘Team Taliban’, he played a terrorist. “That was actually the idea of a promoter who wanted me to play a terrorist type of a character. I was never really a fan of portraying that, so I portrayed a character that could not escape racial discrimination in America.” In fact, in 2009, a documentary was made on Ali and his dilemma of being a Muslim wrestler who does not want to portray stereotypical characters.

Over the years, Ali has been able to carve a following of his own. “I’m a proud Muslim. I’m proud to have a Pakistani origin. And I want this country to accept me. I want to bring to light the fact that we are all the same.” Ali believes if he captures people’s attention with his wrestling skills, “they’re more likely to lend me their ears so I can speak about topics dear to me, such as equality and racism”.

In the past, Ali has had the opportunity to step in the ring with some of the greats like Jerry ‘The King’ Lawler and Chavo Guerrero. “Anytime you wrestle someone on that level, you learn a lot. Sometimes I’m in the ring and look across and see my opponent. He is someone who I grew up watching on TV,” he says. “It blows my mind. From watching this person in my living room to being in the ring with them is an insane feeling.”

Things have never been easy for the performer throughout his journey. He recollects, “I’ve had the best and the worst nights and moments of my life because of wrestling. But this journey has made me into the man I am today.” Nowadays, a wrestler needs to be more of a hybrid, combining different styles, to become a perfect package. Looks and promo skills are also important for marketing, especially in WWE. Ali views himself as a hybrid as well. “I have been trained in the American style of wrestling, strong style Japanese wrestling, Lucha Libre wrestling and so on. You have to be a hybrid nowadays because today’s wrestlers are stronger, faster and more agile. You have to evolve.” Ali’s finishing move is the Inverted 450 Splash.

Pakistan’s representation in 2016 Olympics next to none

A matter of fact is that pro-wrestling is storytelling at its best; it is a story told through body language. Often misunderstood, wrestling is a spectacle to be witnessed and enjoyed. Ali recalls a friend’s words, who once told him, “Wrestling is whatever you want it to be.” He adds, “It is art. People try to put it in a box and say it has to be this way. That’s not true. Wrestling can be any style, any weight class. It could be a moving story, it could be a car wreck … it could be anything you envision it to be.” When the WWE signed The Great Khali, its popularity and business grew in India. Ali, whose parents hail from Karachi has reason to believe he can become for Pakistan what The Great Khali became for the neighbouring country. “I think being the only Pakistani wrestler in WWE will bring some attention from the country as well. I’ll do my best to do Pakistan proud and give them something to cheer about.”

If given an opportunity to wrestle someone of his choice (dead or alive), Ali says he would “cry tears of joy if I ever got to share the ring with Eddie Guerrero.”