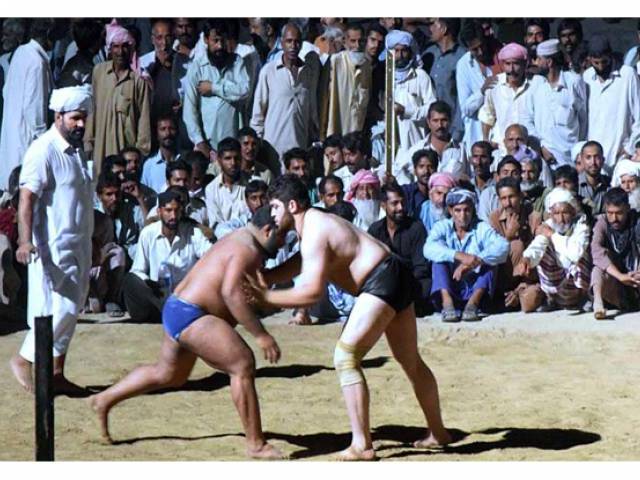 Over 100 pehlwans (wrestlers) participated in the Fifth All Punjab Dangal at Dring Stadium, Bahawalpur, on Tuesday. The event was organised by the District Sports Committee and the District Wrestling Association.

DCO Ehtesham Anwar was the chief guest at the opening ceremony. “The noble sport holds sway in urban and rural areas alike…It is one of the oldest sports in our region and therefore reflects our history and culture.” The DCO lauded the role of the pehlwans in keeping the tradition alive.

Malik Zaheer Channar, son of Minister Malik Iqbal channar, said the pehlwans of Bahawalpur had brought much fame and a good name to the sport and their hometown. In the Rustum-i-Pakistan category, the most prominent contest at the dangal, Usman Biloo of Sheikhupura got the gold, defeating Masab Niazi, a former gold medallist. Niazi had been injured in the round.

In a lesser but equally thrilling competition, Aurangzeb defeated Shahid Pachaar, the current champion of the Punjab.

Rana Allah Bakhsh Kanju and Azeem Maqnatees of the Bahawalpur Division of the International Pehlwan Dolee Awan Rustum were the referees. Sohail Ahmad Paashi was the chairperson of the technical committee.