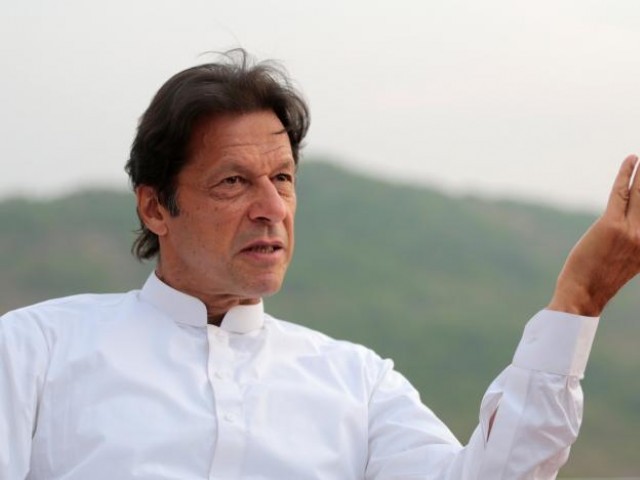 ISLAMABAD: Pakistan Tehreek-e-Insaf Chairman Imran Khan will appear today (Wednesday) in the Supreme Court with a reshuffled legal team not only to plead his case against the Sharif family’s offshore companies but also to defend himself against similar charges before a different bench of the same court.

Currently, the top court is hearing a slew of petitions primarily seeking Prime Minister Nawaz Sharif’s disqualification in the wake of revelations in the Panama Papers that his three children secreted away their wealth in offshore companies.

One of the petitions, filed by the ruling PML-N’s politician Hanif Abbasi, also seeks Imran’s disqualification for ‘concealing his sources of income’.

It will be the first day for Naeem Bukhari to argue the case on behalf of the PTI chairman after Hamid Khan declined to continue as the lead counsel for the PTI.

After the last hearing two weeks ago, Hamid had called it quits amidst judges’ criticism of his grandiloquence and the subsequent media coverage of the same.

The PTI, which submitted three volumes of documents against the Sharif family at the start of the case earlier this month, has augmented them this week with fresh evidence to press its stance that Sharif’s London properties had been purchased in 1990’s contrary to the ruling family’s claim of buying them in 2006.

Sources said the Sharif family would submit further details and additional documents pertaining to the purchase price of their London properties. “We will submit three separate registries of these flats before the court today,” a leader of the ruling party told The Express Tribune.

Moreover the PML-N legal team will press the bench to continue hearing the case instead of referring the matter to the proposed inquiry commission, sources added.

The ruling family is relying on two affidavits it has filed earlier – one by a Qatari prince and another by prime minister’s cousin Tariq Shafi – to prove money trail for the purchase of properties in Britain’s capital.

“If the matter is referred to the commission, both the gentlemen [the Qatari prince and PM’s cousin] will have to be in the witness box and will be cross-examined to authenticate their affidavits. This is one of the reasons we will like the current bench to adjudicate the issue,” another PML-N leader said while requesting not to be named.

On the other hand, the PTI will be testing its new lead counsel for the first time amid continued bickering within its fractured legal team. A segment in the party is pressing Imran to take a lead role and present the case himself.

Interestingly, one of the prominent lawyers in the PTI team, Babar Awan, did not show up in Tuesday’s meeting where party deliberated its strategy. Prior to appointment of Bukhari as the lead counsel, there were reports that Awan was considered as a replacement for Hamid. It is also likely that the PTI new lead counsel will give defendant the podium after making a concise statement.

“It will all depend on how the judges conduct proceedings tomorrow. Fate of cases of political nature hinges on how bench examines the matter – whether they go ‘inquisitorial’ or ‘adversarial’,” a legal expert said.

Elaborating the difference between the two terms, he said that in an inquisitorial system, the court is actively involved in investigating the facts of the case. In the adversarial approach, the court’s role is primarily that of an impartial referee between the prosecution and the defence. The PTI wants the court assume inquisitorial role, while the PML-N wants it to play adversarial role, he added.

In his 21-page statement submitted before the Supreme Court, Imran has contended that it has never been his stance that mere formation of an offshore company is an offence. “The issue is whether the assets under an offshore company are the outcome of money laundering, corruption, loot or plunder of the wealth of the country or the people of Pakistan,” he says.

The reply contends that the tone and tenor of the averments in the PML-N leader’s petition directed personally against him is contrary to law and the Supreme Court’s Rules 1980.

It states that the petition had been filed to counter Imran’s plea against Sharif, his family and others, to settle a personal grudge. He has also objected that Abbasi does not qualify the test of being bona fide as he had been defeated by Imran in the 2013 elections at NA-56 Rawalpindi.

“The petitioner is accused in what has become known as Ephedrine scandal and his role in the construction of Metro Bus Service between Islamabad and Rawalpindi is yet to be investigated.”

Imran also says that he paid all applicable taxes on his income by playing cricket and through other sources of income. He adds that he paid for his flat in London from money earned abroad.

The reply says the London property was purchased in 1983 out of the income earned outside Pakistan as a professional cricketer on which taxes were duly paid. Later, Niazi Limited was incorporated and its asset was the London apartment, whose absolute owner was Imran.

“The answering respondent (Imran Khan) married Jemima Goldsmith in 1995 and divorced her in June 2004. However, in 2002 his wife and family moved to the United Kingdom. In order to spend more time with his family, he was also spending his time during that period in UK. Later, he sold Landon apartment and purchased the land of Bani Gala,” it says.

Imran says he has never acquired funds from the prohibited sources to fund the political activities of the party, adding that he has neither instructed nor encouraged any member or sympathiser to destroy any state property. He also denies that he evade any taxes.