The accide­nt took place near the Colomb­ian city of Medell­in on Monday­
By AFP
Published: November 29, 2016
Tweet Email

BOGOTA: At least five people are believed to have survived after a plane carrying 81 passengers, including members of a top flight Brazillian football team, crashed in Colombia, officials said.

So far 25 bodies have been recovered and 76 passengers are reported dead. Rescue operations at the site of a plane crash in central Colombia were suspended in the early hours of Tuesday morning amid heavy rain, Medellin airport said. 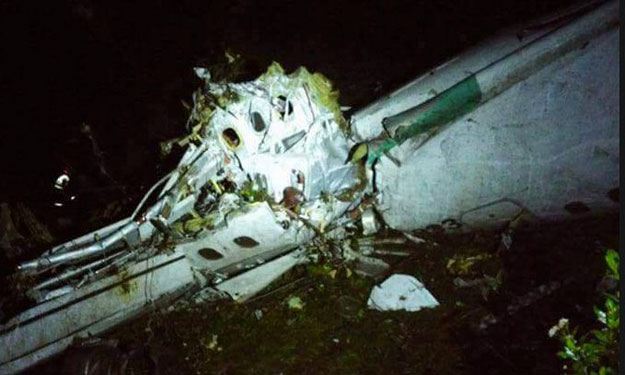 “Search and rescue of the crashed Chapecoense plane is suspended because of heavy rain in the accident area,” Medellin airport, where the plane had been set to land, said on Twitter.

The accident took place near the Colombian city of Medellin on Monday.

The airport that serves Medellin said that among the 72 passengers and nine crew were members of Chapecoense Real, a Brazilian football club that was supposed to play against Colombia’s Atletico Nacional Wednesday in the South American Cup finals.

The LAMIA aircraft was flying from Bolivia to Medellin when it crashed in an area called Cerro Gordo about 50 kilometers from the city, Colombia’s second largest.

“It appears that the plane ran out of fuel,” Elkin Ospina, the mayor of the nearby town of La Ceja, told AFP.

He said authorities were on the scene and hospitals and medical centers were preparing to receive the injured.

On its Twitter account, the Medellin airport said the crash site could only be reached overland because of bad weather in the area.

Colombia’s civil aeronautics agency said it had a team at the airport in response to the crash.

Indonesian woman flogged for close proximity with a man