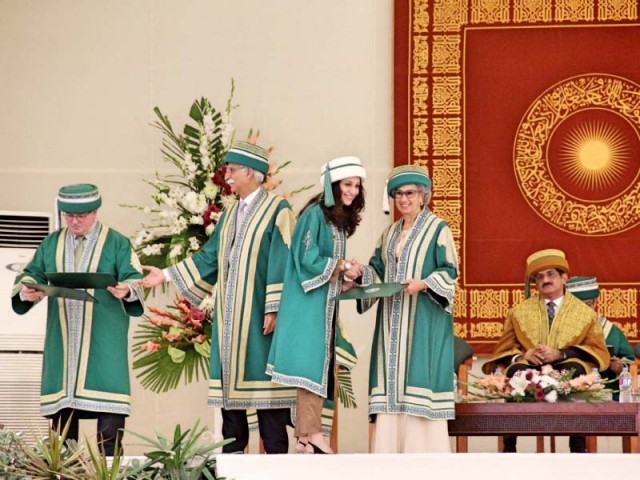 A total of 104 doctors were awarded the degree of Bachelor’s of Medicine and Bachelor’s of Surgery, while 38 graduates were conferred Master’s in Education from IED. PHOTOS: AYESHA MIR/EXPRESS

KARACHI: Attired in green and white gowns and wearing bright smiles on their faces, as many as 383 students of Aga Khan University’s (AKU) medical college received their entry passes to reality on Saturday morning.

The graduating doctors gathered at AKU’s cricket ground, which was transformed into a convocation hall for the ceremony, to receive their degrees at the varsity’s 29th convocation.

The ceremony began with the academic procession led by the chief guest, Chief Minister Murad Ali Shah, the deans and faculty members of various schools, followed by the graduates of all disciplines.

For enlightened doctors: Need urged for overhaul of medical education 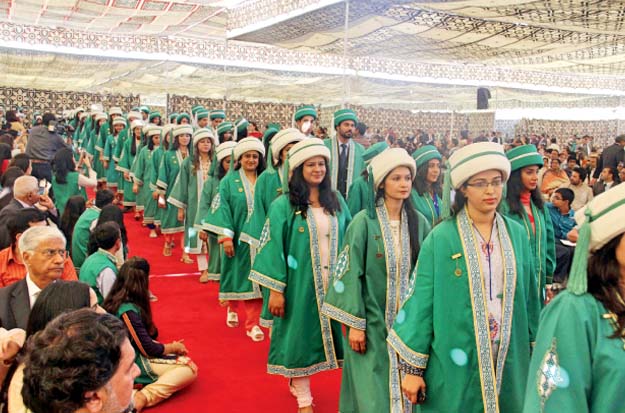 A total of 38 graduates were conferred their degrees from the Institute of Educational Development for Master’s in Education.

After receiving their degrees from their respective deans and AKU president Firoz Rasul, the young students took an oath to serve people to the best of their abilities.

During the welcome speech, the AKU president congratulated the graduating students and told them that AKU has invested trust in them and will be celebrating their success with them. So far, as many as 13,500 doctors have graduated from AKU, he added.

Rasul also announced that they are planning to start offering degrees in arts and social sciences at the varsity.

Shah, in his keynote speech, informed that the Sindh government is very seriously working for improving the health department of the province. “From the Rs80 billion allocated budget for health, more than Rs50 billion [have been allocated] for development expenditure,” he said, adding that the government will be hiring 6,000 new doctors in the coming weeks. 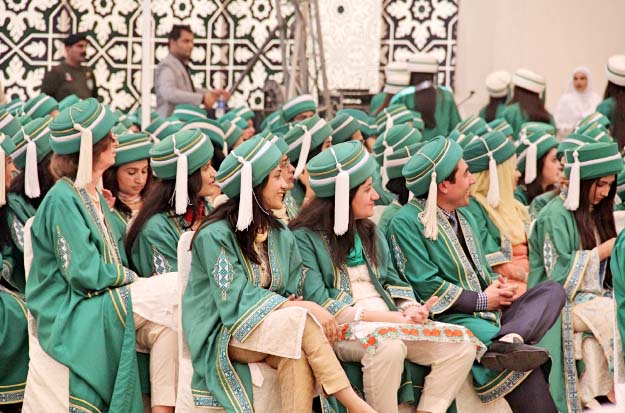 Encouraging the newly graduated doctors, he said that one should be loyal to their work as the patients have a lot of trust in the doctors. “People do not believe machines but [they will believe] you,” he said.

The valedictorian for AKU class of 2016, Shiraz Hussain, spoke about the five years he spent at the campus. From remembering late night cricket matches and tea parties to the staff help in various competitions, he appreciated each and every person in the university who was always there to help the students.

Calling AKU the ‘Harvard of East’, Hussain reminisced how his mother cried when he received the acceptance letter from the university. “This place has transformed us [graduating doctors] from teenage irresponsible students to responsible doctors,” he said, adding that it is a bittersweet feeling that the same hall, which welcomed the young doctors five years ago, is now being used to bid them farewell.

The best graduate awards, in terms of highest aggregate marks all over the course, were given to Dr Saneeha Shahid from MBBS and Aziza Jaffer Ali from SONAM.