Literary delight: Lahore gears up for a Faiz-inspired weekend

Literary delight: Lahore gears up for a Faiz-inspired weekend 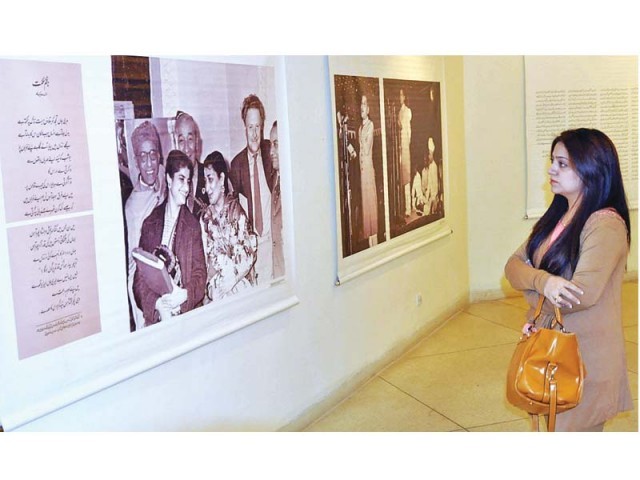 LAHORE: The Faiz International Festival 2016 was inaugurated on Friday with rich tributes paid to the revolutionary poet, leftwing intellectual and journalist.

The opening ceremony of the three-day festival held at the Alhamra Art Gallery was inaugurated by Salima Hashmi, the daughter of Faiz Ahmad Faiz, along with Alhamra Chairman Kamran Lashari, renowned actor Usman Peerzada, actress Samina Peerzada and many other celebrities.

In the opening speech, Salima shed light on the life and struggles of Faiz, saying he served Pakistan with his words and used poetry, journalism and writings, on which he was incarcerated.

Alhamra Chairman Kamran said that Faiz was an extraordinary poet and his poetry eclipsed every other poet of the time. “Faiz’s other works were an extension of his poetry, be it works of philosophy, a revolutionary, a humanist, an intellectual, or a torchbearer of human freedom,” he added.

Kamran said that Faiz was also known as the voice of revolution and he always emphasised the need to create political awareness among workers.

The first day concluded with a performance from Ajoka Theatre who presented their recently made play Anhi Maai da Sufna (A Blind Old Woman’s Dream) written by Shahid Nadeem. The play was inspired by true stories of people who lived through the Partition of 1947.

The three-day festival will continue till Sunday with over 18 sessions over the next two days. Adeel Hashmi will host a session with actor Fawad Khan.

The festival has been organised by the Faiz Foundation to pay tribute to the poet, who also served as a journalist and was the founding editor of Pakistan Times.