Mosul area retaken, but still danger of IS attack

Mosul area retaken, but still danger of IS attack 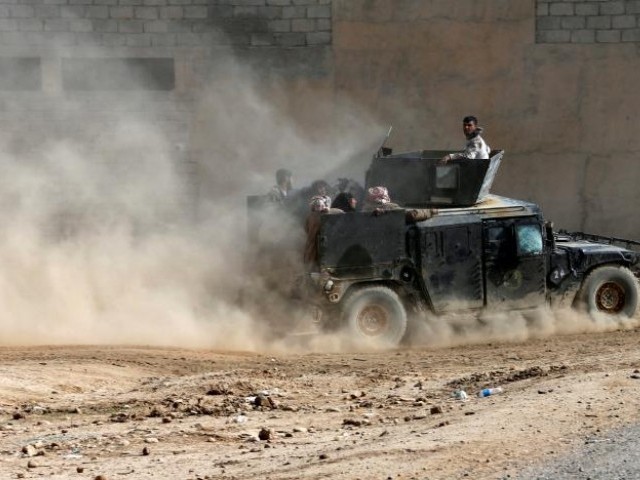 Displaced people flee Samah neighborhood in a military vehicle of the Iraqi army during a fight between the Islamic State militants and the Iraqi Counter Terrorism Service, in Mosul November 13, 2016. PHOTO: REUTERS

MOSUL, IRAQ,: A black Humvee speeds down a dusty road in eastern Mosul carrying two boys: one is dead, and the other’s leg has been torn open by the same mortar strike.

“Save me, save me!” yells 12-year-old Mohammed, his legs covered in blood, as two men carry him from the armoured vehicle to a green canvas cot at a dusty, open air field hospital.

US ready to support Iraq in ‘difficult fight ahead’ for Mosul

It is too late for Shafiq, 15, who was standing with Mohammed when the mortar rounds struck. He died of his wounds on the way to the field hospital.

After a relatively quiet afternoon Sunday, a sudden boom rattled the al-Samah neighbourhood, which elite Iraqi forces say they have cleared of Islamic State group militants.

Minutes later, the dust-covered Humvee arrived with the two boys. “We were standing outside just like we’re all standing here,” says Ghassan, their neighbour. Mortar rounds “hit one right after the other. Mohammed and Shafiq were the first ones to fall”, he says, wiping his bloodied hands on his pants.

Shafiq’s body is taken off a black stretcher, covered and placed on the ground between two ambulances. “Just let me kiss him,” his father says, pushing his way through to bid his son goodbye. Shafiq’s grandfather sobs nearby with his head in his hands as neighbours and relatives try to comfort him.

Amid the chaos, medics try desperately to save Mohammed, whose right leg is twisted grotesquely inward starting at a deep gash above the knee. A foreign medic cuts away Mohammed’s blood-soaked pants with a pair of scissors. One man helps to bandage his arm, which is lightly wounded, and tries to comfort the wounded boy. “Don’t be afraid, and don’t close your eyes,” he says softly.

US tries to defuse Iraq-Turkey war of words over Mosul

“Check for other wounds, please!” the foreign medic says in English, after placing a tourniquet around Mohammed’s leg. A middle-aged woman in a black robe and white headscarf tries to reach the area from the dirt road leading out of al-Samah, but several boys hold her back. “Is Mohammed here? What happened?” she screams.

After trying to stop the bleeding, medical staff load the boy into the back of an ambulance to take him to hospital. The attack is a bloody reminder to civilians in areas in Mosul recaptured from IS — many of whom are trying to return to a semblance of normal life — that they are still very much in danger.

On the eastern edge of Mosul, the target of a massive Iraqi military operation launched on October 17, men wait outside a barber shop where some have their IS-mandated beards shaved or their goatees styled.

They murmur in agreement when the lean hairdresser says he is glad IS has been kicked out of their district, but refuse to speak to the press as many still had family in jihadist-controlled parts of the city. In Arbajiyah, which the elite Counter-Terrorism Services (CTS) retook from IS on Saturday, scrawny children venture out to find tea and bread. Several gather outside Souq al-Mahdi, a tiny convenience store that reopened the day CTS forces moved into the neighbourhood.

“When (IS) was here, we were open but they would force us to close at prayer time,” says shopkeeper Abu Saeed, a round-bellied man with a thick moustache.

The heavy clashes and shelling that have hit Arbajiyah in recent days kept Abu Saeed at home and the metal gate outside his shop firmly closed. “Then when we were liberated, life came back to normal and we reopened,” he says.

But “normal” is clearly relative — Abu Saeed keeps his shop open only for a few minutes at a time, and most of his customers are Iraqi special forces soldiers with weapons slung over their shoulders. Residents of al-Samah emerge from their homes throughout the day to resume mundane activities such as sweeping their front steps or hanging out laundry.

Just a few metres (yards) away, a charred body said to be that of an IS fighter lies in the street.