My trip to the ‘dream city’ of Gwadar is preced­ed by a realit­y check: “The situat­ion here is volati­le” I am warned.
By Moign Khawaja
Published: February 27, 2011
Tweet Email 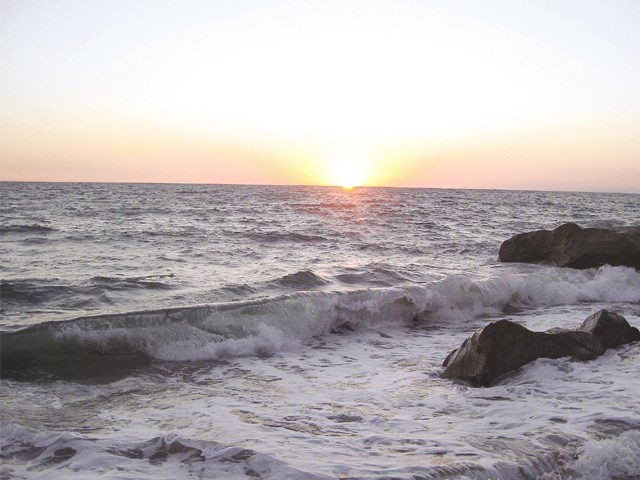 My trip to the ‘dream city’ of Gwadar is preceded by a reality check: “The situation here is volatile,” warns my friend, “Baloch political activists routinely disappear and are killed.”

But that does nothing to deter me. Balochistan is a province with rich deposits of oil, gas, gold, copper and rare earth metals and Gwadar, one of its largest cities, is the hub that crystallises its potential. Despite the constant barrage of bad news from the province — “militants blow up gas pipeline” is now a staple news item — Gwadar still conjures up images of pristine beaches and rugged mountains and evokes the same mood of optimism that was generated eight years ago when the development of the port city first begun.

The Gwadar deep-sea port project was announced in 2002, when former Pakistani president General Pervez Musharraf promised to transform Balochistan’s destiny by an equitable distribution of resources. Inaugurating it in March 2007, the autocratic leader not only ensured the timely completion of the mega project, he also got the Chinese government to finance and execute the development of the port’s facilities. So far, an estimated Rs5 billion ($264 million) have been poured into the project for the construction of three multi-purpose berths with a capacity to handle ships of up to 50,000 deadweight tonnage (DWT).

But when I visit the port, I see the cranes lying idle and deserted. A port official informs me that the cargo handling cranes received a large fertiliser shipment some five months. Nothing much has moved since.

Instead, the harbour has become a hub of oil smuggling thanks to the absence of regulated petroleum products in the city. Launches from Iran arrive at the harbour loaded with cheap petrol and diesel. The cheap Iranian oil provides livelihoods to thousands of people who fetch the shipments from the Iranian border and dispatch it to other parts of Balochistan.

This inferior oil’s popularity is soaring thanks to increasing petroleum prices in Pakistan. According to Wasim (not his real name), an oil smuggler, the Pakistani Coast Guard, Pakistan Customs, Levies and other border control agencies are in on the game. “All a smuggler needs to do is to grease the palms of the ‘law-enforcement’ officers to get their shipments smuggled anywhere without hassle,” he claimed, pointing out large yellow petroleum cans that were being off-loaded from a launch.

Most of the locals in the area are fishermen, but they face a two-pronged challenge: first, they have to deal with the smugglers who pollute the water by plying oil in their launches, and secondly they have to deal with poachers who trawl illegally in Pakistan’s maritime waters, denying local fishermen their catch. “Local fishermen are suffering terribly… illegal foreign launches trawl in our water and snatch away their livelihood,” says Qambar Nisar, a fisheries department officer.  “We don’t have the means to defend our coast. Sometimes we carry fake weapons and limited fuel to ward off attacks by well-equipped invaders. We fear for our lives.”

The mega development of Gwadar offered mega dreams on sale. Not long after the deep-sea port project was announced, the property market boomed with Gwadar’s prime land up for grabs. Locals sold their land at throwaway prices to real estate developers who rebranded the estates and sold them to investors from other provinces at many times the original price. The elite lined up to purchase acres of residential and commercial land in what was touted as ‘Pakistan’s future Dubai’.

The property bubble burst when Baloch leader Akbar Bugti was killed in his hideout in the hills of Dera Bugti in 2006. Strikes erupted across the region, and law and order (the writ of the state) in the province collapsed, with enraged political activists joining the insurgents and staging attacks on the security apparatus in the province.

“I used to have a booming property business but it is all gone now. Investors withdrew their capital and fled the market,” says Qambar Nisar who now works for Gwadar Fisheries. “Every other day we hear about the disappearance of young Baloch activists. Their mutilated bodies are later discovered in isolated places,” he laments the worsening situation. “Sometimes Baloch towns and cities remain closed for three days in mourning. How can we do business in this situation?”

In New Town and Sangar — the city’s prime housing estates —land lay idle with little or no construction going on. Some government projects were being worked on at a snail’s pace. Wealthy buyers keep this land as an investment while many of the mid-level buyers have sold it cheaply in order to recover their money. Everyone, it seems, lacks trust in the government.

Gwadar does have a -star hotel for those who fancy a luxury vacation but it closed recently because of deteriorating law and order. Brand new dual carriageways, a hospital, a college, courts, and residential complexes have been built but are yet to be operational. The Gwadar Development Authority has overseen the development of the new city since 2003, but has not touched the old city since it had not been given the mandate to uplift old Gwadar. As a result, the city’s main Airport Road lies in ruins. The Federal Government in Islamabad decides the city’s fate and releases the funds ‘when and where needed’.

Meanwhile, locals no longer trust policy makers. After selling their land cheaply, they are concerned that the changing demographics will make them an ethnic minority in their own province. The port construction projects did not generate employment for the local Balochs who, despite lacking the technical skills and experience, were determined to become the backbone of development.

However, the contractors preferred the cheaper and better-trained labour from other parts of the country. The denial of jobs to the locals, as a result, generated frustration and fanned the flames of ethnic conflict.

“The people living in Gwadar are genuinely concerned about the demographic shift after the development of the port. They fear the port city’s massive growth will sideline them and they’ll lose their houses, lands and livelihood,” says Shey Mansoor, an official at the Gwadar Development Authority.

It wasn’t always so. When Gwadar was incorporated into Pakistan in September 1958, with the Sultan of Oman ceding control to General Ayub Khan, the local population welcomed the change. “I was a child at the time but I remember how Gwadar’s people celebrated when the peninsula joined the rest of Balochistan and Pakistan,” says Khuda Bukhsh, a former local government officer. “Back then we were happy to be part of Pakistan and believed things would change. Not a lot has changed for the better though. Yesterday we were happy to be part of you and today we’re unhappy. Something must have gone wrong in between, don’t you think?” he quizzes.

This resentment is born of a feeling of exploitation that resonates from the shores of Arabian Sea in the south to the Chagai Hills in the north. Most Baloch people are of the view that the province has almost become a colony for the rest of Pakistan providing gas, oil, copper, uranium, gold, coal and other minerals but receiving next to nothing in return. Sui gas field accounts for at least a third of Pakistan’s total gas production but many of Balochistan’s own towns and cities, including Gwadar, lack gas supply through pipelines. In contrast, most cities in Punjab, Sindh and Khyber-Pakhtunkhwa receive gas through pipelines that power industries and houses. “I don’t care if there is a gas shortage in parts of Pakistan, because we produce the gas and yet we do not have it,” says Jalil Dashti, a young business studies graduate.

Not a single day passes without news of bullet-riddled bodies of Baloch activists found in isolated places of Balochistan or a gas-pipeline blown up by so-called ‘miscreants’. Rag-tag Baloch rebels claim responsibility for the attacks and blame the Pakistani government for exploiting the region’s resources and enriching other parts of the country, especially Punjab, at Balochistan’s expense. Islamabad, in response, says these people are Indian-sponsored agents bent on undermining the writ of the Islamic Republic.

Gwadar has become a hub of political activities for many Baloch nationalist parties which advocate the idea of an ‘independent Balochistan’ that develops its own resources and spends the income generated only on its citizens. Some political parties also demand provincial autonomy under the 1973 constitution, which ensures complete rights over the resources of the region. Activists from Baloch nationalist parties face abductions, imprisonment, torture and extra-judicial killings on a routine basis. Nor are the insurgents forgiving of those who defy their dictates, routinely shooting down those who oppose their agenda. Caught between the insurgents and the state, the Baloch people seem to be running out of options.

Despite all the damage and destruction, there remains a glimmer of hope: if this exploitation is stopped, peace and reconciliation are still possible. Otherwise, we just need to open our history book, turn a few pages and read what happened 40 years ago when Pakistan faced a similar situation in its eastern wing…