Presid­ent Zeman acknow­ledged that plans to award a state medal to George Brady had been droppe­d
By Reuters
Published: October 23, 2016
Tweet Email 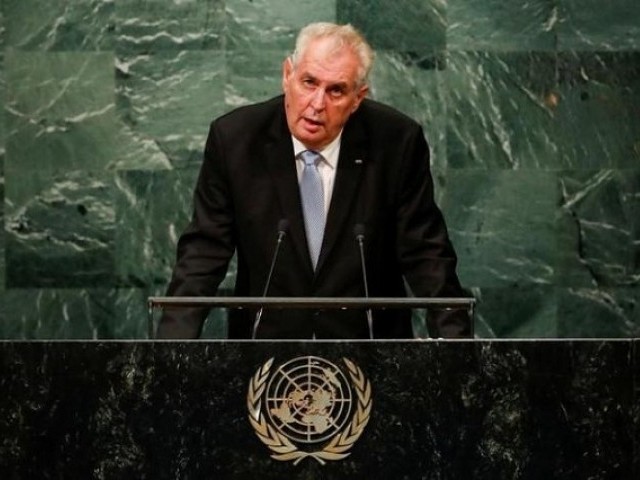 PRAGUE: Czech President Milos Zeman has denied that his decision not to award a medal to a Holocaust survivor was because the man’s nephew, a Czech government minister, had angered China by meeting the Dalai Lama.

Culture Minister Daniel Herman met the exiled Tibetan leader this week against the wishes of Beijing and Zeman, who has strongly pushed for a closer economic relationship with China.

The drive for Chinese investment has met opposition in a country whose post-communist policies strongly promoted human rights. Once a dissident and then president, the late Vaclav Havel was a friend of the Tibetan Buddhist monk and Nobel Peace Prize laureate.

President Zeman acknowledged that plans to award a state medal to George Brady, 88, had been dropped, Finance Minister Andrej Babis was quoted as saying on Saturday.

But Zeman denied the change of plan had anything to do with Brady’s nephew, Culture Minister Daniel Herman, meeting the Dalai Lama.

“Mr President says it has nothing to do with the Dalai Lama, but he confirms that he had asked Mr.Herman not to meet Mr.Dalai Lama,” Babis was quoted by www.idnes.cz news website as saying.

Herman’s uncle Brady had been listed to receive the honor for his lifelong campaign for Holocaust remembrance at an annual celebration at Prague Castle, the seat of the president, next Friday on Czech state day.

Brady survived Nazi persecution, including the death camp at Auschwitz in Poland, where his sister and parents perished.

“My uncle informed me he had been contacted by the president’s office with information that his award was being prepared. Now there is news that this has been postponed for this year,” Herman told Reuters.

Asked if he was given an ultimatum not to meet the Dalai Lama in connection with the award, he said: “Yes.”

“The president directly told me that if I meet the Dalai Lama, my uncle will be taken out of the list (for awards), and that is what happened,” Herman told Czech public television. He said the conversation took place in front of witnesses at a banquet in Prague.

A spokesman for Zeman said on Friday the president had completed the list of nominees “some time ago”, and had not subsequently dropped anyone.

The office never releases the names of the recipients of the state medals before the traditional ceremony.

George Brady moved to Canada after the war. In 2000, a suitcase with his sister Hana’s name surfaced in a Tokyo Holocaust Museum, whose director discovered her relation to George. Hana’s suitcase later inspired a book, theater play and a film.