Says Pakist­an is a resour­ce-rich countr­y with a bright future­
By Our Correspondent
Published: October 20, 2016
Tweet Email 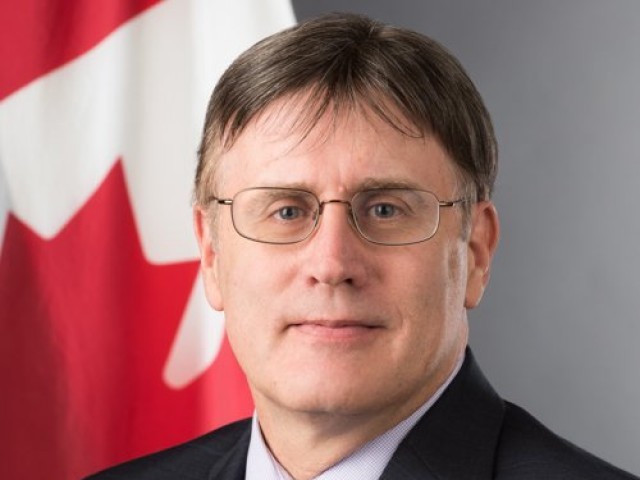 LAHORE: Canadian High Commissioner Perry Calderwood has said that the two countries have huge scope to work together and build on their economic relations, adding that Pakistan is rich in resources and has a bright future.

He was speaking at the Lahore Chamber of Commerce and Industry (LCCI) on Wednesday accompanied by LCCI Vice President Muhammad Nasir Hameed Khan and former LCCI president Mian Misbahur Rehman.

Calderwood said private sectors of the two countries should promote trade, investment and economic partnership in areas of mutual interests. He said that more areas for trade and investment should be identified as the existing trade volume does not reflect the true potential of the countries.

He said that the Canadian Embassy in Islamabad is ready to provide maximum cooperation to Pakistani businessmen.

The envoy said that Pakistan could take benefits from the expertise of Canada in the sectors of oil and gas, hydropower, alternative energy and transport sectors.

LCCI Vice President Muhammad Nasir Hameed Khan said that Canada is one of the countries that has supported Pakistan in its efforts to acquire sustainable economic growth.

“Pakistan is eager to maintain good working relations with Canada to optimise the available options for greater trade and investment.”

Khan added that it is encouraging to see that bilateral trade between Pakistan and Canada is following an increasing trend. From 2013 to 2015, the volume of trade has gone up from $356 million to $657 million but the exports of Pakistan to Canada are continuously declining.

“In this time period our exports dipped from $234 million to $216 million and in contrast imports jumped up from $122 million to $441 million,” the LCCI vice president added.

Khan said that this scenario has shifted the positive balance of trade in favour of Canada.

He urged the high commissioner to propose steps that may contribute in increasing the trade volume and projecting Pakistan as a safe destination for foreign investment.