High emotio­n and refere­nce to nation­al honour should be avoide­d in the Davis affair.
By Editorial
Published: February 17, 2011
Tweet Email 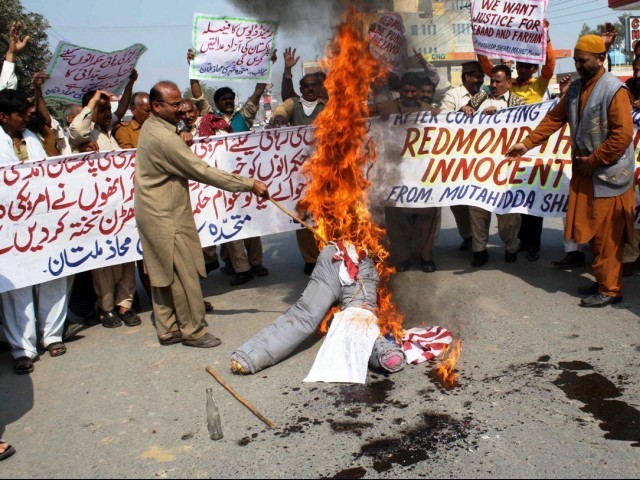 Protesters torch an effigy of US senator John Kerry and a US flag during a demonstration against arrested US national Raymond Davis, in Multan on February 17, 2011. PHOTO: AFP

The latest on the Raymond Davis case is that US Senator John Kerry has come to Pakistan and tried to smooth ruffled feathers. He said that the case should not jeopardise US-Pakistan relations, but stuck to the American position that Mr Davis has diplomatic immunity and should not have been arrested, nor should he be tried in a Pakistani court.

The January 27 incident in which American citizen Raymond Davis shot dead two Pakistanis, and where a third Pakistani was crushed by a car sent by the US consulate to Mr Davis’s help, has spiralled into a crisis of relations between Pakistan and America. The media has highlighted the details of the case and has engaged the emotions of the people, thus giving a handle to the opposition to embarrass and humiliate the federal government.

The status of Mr Davis is disputed between Pakistan and the US, the former divided on how to tackle the matter and the latter proclaiming that he is covered by the immunity clauses of the Vienna Convention on Diplomatic Relations. In the national discourse, it is not so much the legalities of the case that are being highlighted but the matter of ‘qaumi viqar’ and ‘qaumi ghairat’ (national honour). The case against Mr Davis is being heard at the sessions court, where the police seems to have indicted the accused on lines favoured by the collective emotion in Pakistan. At the Lahore High Court, which has put a lock on Mr Davis’s immunity by preventing his departure from Pakistan, the federal government will be required to state his real status.

Even as TV channels whipped up the national emotion — with just a few glimpses of the ‘variant’ point of view — the Punjab government decided to ‘go with the people’. As revealed by Chief Minister Shahbaz Sharif, the federal government was resolved from the start to let Mr Davis go, but when it approached him, he told Islamabad that it had to now go through the court. The police in Lahore thereafter made a case against Mr Davis disallowing his claim that he acted in self-defence, though it did say that pistols were recovered from the two men he had shot dead.

Other events have complicated the situation, revealing a clear difference of opinion on the case. This has further served to isolate the PPP government and brought it under pressure. Shah Mahmood Qureshi, refusing to be a minister after a cabinet reshuffle, has controversially gone on record as disagreeing with the government on how to treat the Davis case. While swearing allegiance to the party, he decided to make public his opinion on the matter, knowing full well that it would be deeply embarrassing for the government. During his press conference on February 16, his position was expressed not in legal terms but in high emotion where he appealed to the nation “to stand up to America” and stop bending to its dictates.

Senator Kerry did not fail to note the difference of opinion. He referred to the position taken by PPP Information Secretary Fauzia Wahab, confirming that Mr Davis had immunity under the Vienna Convention. It matters little that later the Presidency disowned her opinion and she herself said that what she had said was her personal view. The message that went out was clear: the PPP government was ready to treat the matter with the pragmatism it deserved. If Prime Minister Yousaf Raza Gilani has officially told Mr Kerry that his government will let the courts decide the matter, thus adopting the position that Mr Davis had no immunity, a subliminal message of the opposite import has been registered with Ms Wahab’s statement.

The killings that have taken place at the hands of Mr Davis make the case unprecedented and the US government must take cognisance of that fact. But given even this, it would be wrong to insist that Pakistan should not act pragmatically, but in the name of ‘ghairat’. It is worth pointing out that Islamabad has often taken the middle course, or even looked the other way, when relations with friendly Arab countries or China have been at stake.

It is often stated in academic literature on foreign policy that the best course is to allow a lot of flexibility in the conduct of relations with other nations. High emotion and reference to national honour is usually avoided. But this point of view is undermined if the nation is sharply focused on foreign policy and nurtures intense negative feelings towards states that the national foreign policy has set up as important allies.

Extremism has put Pakistan on the defensive by making it adopt an isolationist world view. The world is increasingly concerned about Pakistan’s habit of diverting attention from the real and present danger of al Qaeda and Taliban, and focusing — in a fragmented way — on, to quote a common public refrain, “terrorism carried out by America in tandem with its secret allies, India and Israel”. The Jamaat-e-Islami has begun its agitation against the presumed release of Mr Davis and is appealing to the masses to “rise up” against this “national betrayal”. The Tehreek-i-Insaf has taken out processions to shore up its public position. Ironically, the Taliban, too, have warned against releasing Mr Davis.

Despite Senator Kerry’s assertion that US-Pakistan relations should not be affected by the current row over diplomatic immunity, the message from Washington is clear. The Republican-dominated US Congress wants curtailment of spending by the Obama administration, and the hatchet may fall on the crucial dollars Islamabad needs to push forward its increasingly bankrupt institutions. The economy is still showing a generally downward graph and the year 2011 may actually be a year of more economic instability than most morally-enraged TV anchors may realise.

Reference to honour is usually made on the eve of going to war because the high point of honour is martyrdom. On the other hand, flexibility of response is the characteristic of those who wish to survive in a harsh world. This sets up an opposed binary of honour and wisdom. Yet humanity remembers martyrdom where someone embraced death instead of compromising on principles. It seldom remembers occasions when wisdom (hikmat) has ensured survival under adverse circumstances. Both the US and Pakistan must find that middle ground of wisdom to prevent the current crisis in their relations.

May the best team win