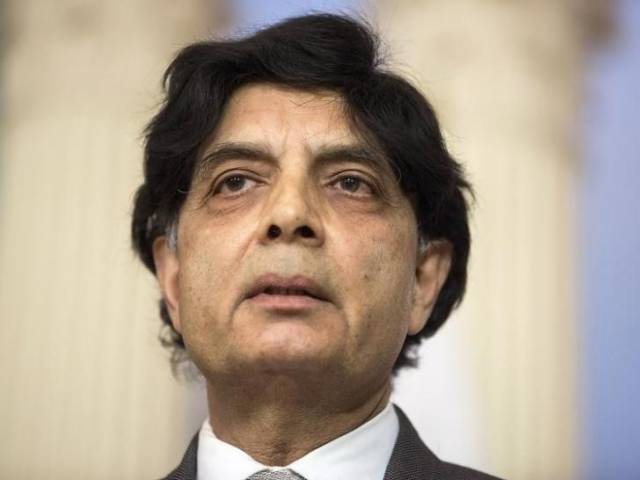 Pakistan's Interior Minister Chaudhry Nisar Ali Khan speaks during a meeting with US Secretary of State John Kerry on the sidelines of the White House Summit on Countering Violent Extremism at the State Department in Washington February 19, 2015. PHOTO: REUTERS

ISLAMABAD: Amidst a deepening controversy involving a news report published in an English-language daily, the country’s security czar said on Thursday that the story in question shored up the enemy’s narrative.

Since the publication of the controversial story in daily Dawn on October 6, the government has ordered an inquiry and put the name of its writer, Cyril Almeida, on the Exit Control List (ECL), triggering a strong backlash from the journalist community of the country, and from media freedom campaigners around the world.

“Read the Hindustan Times, Indian Express, The Hindu, Times of India, watch the Indian news channels, and looking at the comments of a retired Indian lieutenant general – all of them are stating that New Delhi has been vindicated,” Chaudhry Nisar Ali Khan, the federal interior minister, told a news briefing at the NADRA headquarters.

The controversial story provided an opportunity to the enemy to charge-sheet Pakistan, he said. “[The writer’s] name had been put on the ECL after the government learnt that he was flying out of the country,” he added. “Had we left him to go abroad, the government would have been accused of leaking the story.”

In the story, attributed to unnamed sources, Dawn reported that in a high-level meeting on national security, the civilian leaders spoke about the growing diplomatic isolation of Pakistan for lack of action against some militant groups. From the military side, the ISI chief attended the meeting where other participants were civilian government officials, including Prime Minister Nawaz Sharif and his brother Shahbaz Sharif.

First, the Prime Minister House rebutted the story as ‘fabrication’, and then Premier Nawaz ordered an inquiry into the matter as well as action against those responsible for leaking ‘inaccurate information’ to the reporter. Nisar reiterated on Thursday that no such discussion took place in the high-level meeting.

The story is untrue as the writer himself has admitted that all participants of the meeting didn’t confirm the information, he said. Surprisingly, everybody refused to confirm the information, but the story was still published, he added. The newspaper published the government’s clarification, but the reporter used his Twitter handle to announce that ‘he stood by whatever he had reported.

The minister said two other persons have also been included in the inquiry, which would be completed within four days. “Until then, all those who are being quizzed cannot fly abroad.”

“He will be asked to confirm the evidence we have. We’ll not ask him to disclose the source of his story, though there are precedents worldwide where journalists disclosed the source of their information in greater national interest,” he added. “This is not an issue of the PML-N, the government, or the army. Whoever leaked the inaccurate information will be brought to justice.”

About his meeting with British High Commissioner Thomas Drew, the minister said he had formally shared some information on cases against MQM founder Altaf Hussain, including money laundering, Dr Imran Farooq murder and incitement to violence.

He conveyed to the British envoy Pakistan government’s concerns over slow pace of cases against Altaf.

Asked about the recent recovery of a huge haul of arms and ammunition from a vacant house in the Azizabad area of Karachi, where MQM’s headquarters Nine-Zero is located, Nisar said the seized weapons bore resemblance with those in the Nato shipping containers that had gone missing from Karachi port when the MQM was in power in Sindh.

“As the interior minister, I am interested in the documents recovered from Altaf’s residence which included a list of weapons,” he said.

“The weapons on the list matched those recovered from the Karachi house.” He also pointed to the fact that the house from which the weapons had been recovered was situated near Nine-Zero.