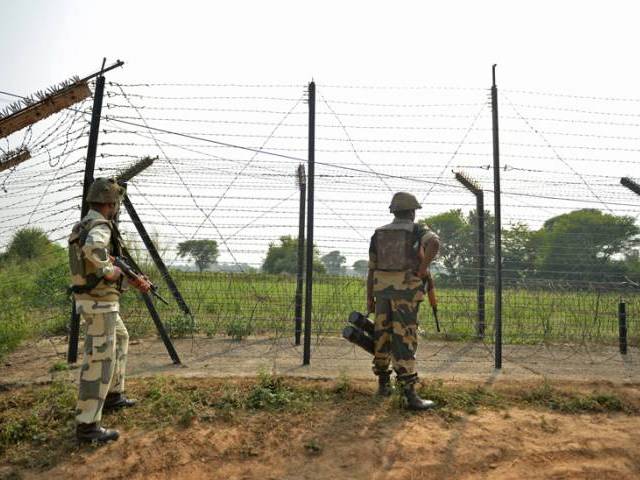 Dr Shazra, speaking on the gross human rights violations in the Indian held Kashmir, said Indian troops were using pellet guns on people, whose use has been banned by the international community even on animals. PHOTO: AFP

WASHINGTON: PM’s Special Envoy on Jammu and Kashmir Senator Syed Mushahid Hussain has warned that tension between Pakistan and India “can impact the on-going war on terrorism”, urging the US to help resolve the lingering Kashmir dispute which can threaten the world peace.

“Pakistan has deployed 200,000 troops on the western border with Afghanistan to fight terrorists. If tension with India increased, Pakistan will have to shift troops to its eastern border,” the senator said while talking to APP.

Hussain said that any talk of peace in South Asian region has to be comprehensive and must include all aspects that are causing instability in the volatile region.

“If you talk of peace in the region, it has to be comprehensive. Talk of peace cannot be compartmentalised, it cannot be segregated. Kashmir is the root cause of tension between the two nuclear-armed states.”

Senator Mushahid Hussain and MNA Dr Shazra Mansab have been visiting the US as PM’s special envoys to highlight the plight of Kashmiri people who are facing the worst kind of suppression and brutalities at the hands of Indian forces.

Hussain said it was the moral responsibility of the US, which is also a signatory to the UN resolutions on Kashmir, to help resolve the issue.

“This is an issue between the two nuclear-armed countries”, which could have implications for the world peace.

The senator stated they were not visiting the US as government’s representatives, but as representatives of the entire nation which has added more weightage to the arguments they made during their meetings with the US officials, American media and the leading think-tanks.

The senator stated that their visit to the US was aimed at highlighting gross human rights violations and the indigenous uprising in Indian-Occupied Kashmir and to inform the administration that Kashmir was not a territorial issue, but it was about the people and their just rights.

The senator stated that the visit also highlighted Indian efforts to distract the world attention from the Kashmir issue by creating false claims and talking about the Indus Waters Treaty. He said the US media tore apart India’s claim of carrying out “surgical strikes” inside Pakistan which never happened.

Hussain said the meeting with US officials also contributed towards highlighting the fact that India could not take a unilateral decision on the treaty, which is an international accord. He said the meetings with the Obama administration helped counter Indian efforts and the US has refused to support India’s stand on the Indus Waters Treaty.

He said that in their capacity as PM’s Special Envoys, he and Dr Shazra held more than a dozen meetings with the US government officials, leading think-tanks and American media to present a case on Kashmir.

Dr Shazra, speaking on the gross human rights violations in the Indian held Kashmir, said Indian troops were using pellet guns on people, whose use has been banned by the international community even on animals.