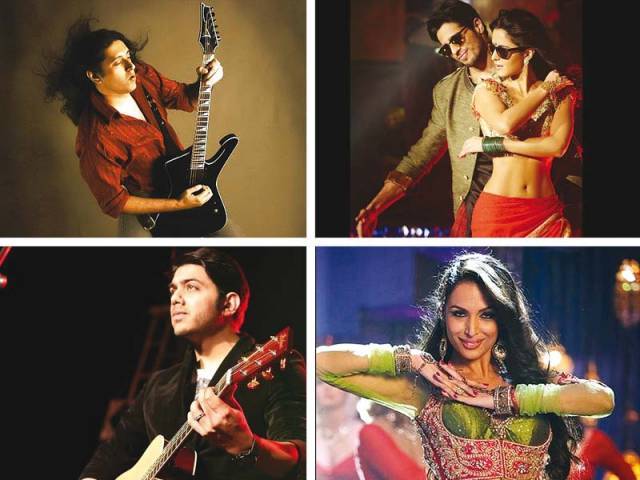 Many local artists blame the fall of the Pakistani music industry on excessive airtime being given to Bollywood content. PHOTOS: FILE

KARACHI: Ask any musician about the death of the Pakistani music industry and they will blame the channels that seemingly forgot the Pakistan Electronic Media Regulatory Authority (Pemra) law, which would allow  only 10% of foreign content to be aired on local television.

The regulatory authority remained mum about the competition Sheelas were giving to the Channos. Little did we know that cross-border tension between India and Pakistan will be able to do what the artists have been wanting to do for quite some time. Pemra announced on Tuesday it will be revoking the licenses of television channels airing more than the allocated quota (6% of the 10% foreign content per day) of Indian content, after the deadline of October 15. And it doesn’t seem like these measures are going to be temporary.

“We are not against the ban on anything but we want the existing Pemra laws to be implemented,” Rashid Khawaja, the founding member of United Producers Association (UPA) told The Express Tribune.  Asked if the implementation of the laws was a knee jerk reaction to the tension between the two countries and things were likely go back to normal, Khawaja responded in the negative. “Now the entire industry is united under one banner and since musicians are also producers, we are also bringing them under our umbrella,” he said. “The UPA will itself keep a track of the content being aired and take it up with the authorities if the laws are not being followed.”

Having said that, the question remains whether reverting back to the initial policy by Pemra could potentially breathe new life into our fledgling music industry? “We have a lot of talent but no place to showcase it. If they go with the initial policy and play 6%, it will be good for our artists. They need a platform and television is one of them,” said Overload frontman Farhad Humayun.

Meanwhile, Karavan’s founding member Asad Ahmed said it was only fair to not play Indian content when Pakistani productions are not being played on televisions across the border either. However, he seemed unsure whether it would benefit local music. “My answer is yes and no. Yes, because it will put the focus back on Pakistani content. And no, because I don’t think there’s a lot of good Pakistani content out there.”

Former Jal member Goher Mumtaz also echoed Ahmed’s sentiments, saying that now, the responsibility shifts to artists to deliver quality music. “It’s a good move because it’s going to help the local talent. Back in the day, we used to have channels like Indus Music promoting local talent. It’s because of them that people know Ali Zafar, Strings and Jal. This move would help artists but now it is the artists’ responsibility to create quality content to match international standards.”

8xM and Jalwa are right now the only two mainstream TV channels being aired in Pakistan that cater to just music. Even the once-celebrated AryMusik has been pushed down by cable operators, with many not even offering the channel anymore.

However, both 8xM and Jalwa are known for playing Indian content and have often been called out by local musicians of charging hefty amounts in exchange for playing their songs. The restrictions by Pemra put these two in an awkward position but the channels’ officials already have a plan in mind. “We have a very elaborate plan for entertaining Pakistani music on our channel and have had it for eight to nine months now. This has nothing to do with the recent Pemra restrictions,” Ali Haider, head of local content at Jalwa and 8xM revealed. “We are already music partners for most of the Pakistani films releasing this season. Other than that, we are also promoting some fresh talent.”

According to Haider, local musicians have no reason to complain as his channels have always welcomed both local and international content that meets a certain standard. “We hardly find quality production in Pakistani songs because the artists are not willing to invest in themselves. On one hand, we have a song from Sultan and on the other, we have a very good Pakistani number which has been shot on a DSLR and doesn’t have the same production value,” he stated. “We have to maintain international standards.”