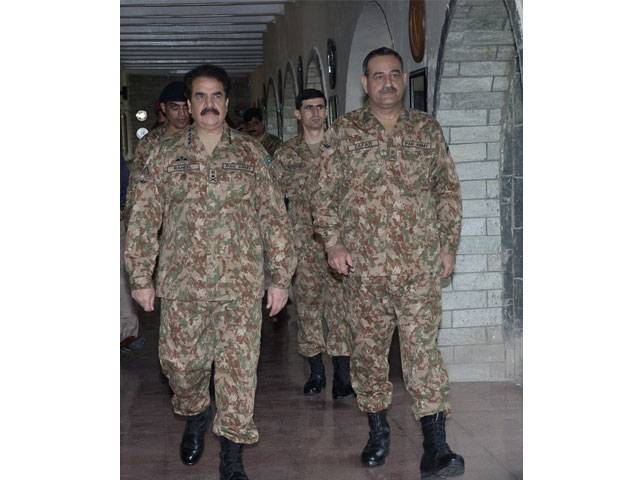 Army chief General Raheel Sharif on Wednesday visited the 10 Corps headquarters  and reviewed the situation on the Line of Control (LoC).

Earlier, the Army chief was given comprehensive briefing on the prevalent situation at LoC and operational preparedness of the units and formations. Corps Commander Lt Gen Malik Zafar Iqbal received General Raheel on his arrival at Corps HQ.

Earlier on Monday, the Army chief visited the headquarters of Pakistan Army’s Strike Corps at Mangla to review the military’s operational preparedness.

Prior to the visit, Pakistan and India had exchanged fire on the Line of Control (LoC) at the Istikharabad, Nezapir and Kailer sectors as Pakistan Army said it responded befittingly to unprovoked Indian aggression. A night before, six militants attacked an Indian Army camp in northern part of held Kashmir, killing one border guard and wounding another.

Meanwhile, General Raheel awarded the Pakistan Army team that secured first position in the International Sniping Competition. Naik Arshad of Special Services Group (SSG) was declared the best sniper of the competition. The event was held at Beijing, China from 22-27 August 2016.

Chairman Military Committee NATO General Petr Pavel called on the Army chief at the GHQ. Pavel appreciated the resolve of Pakistan Army and its continuing efforts towards fighting terrorism and bringing peace in the region.

Incumbent upon world to give Kashmiris right to self-determination: PM