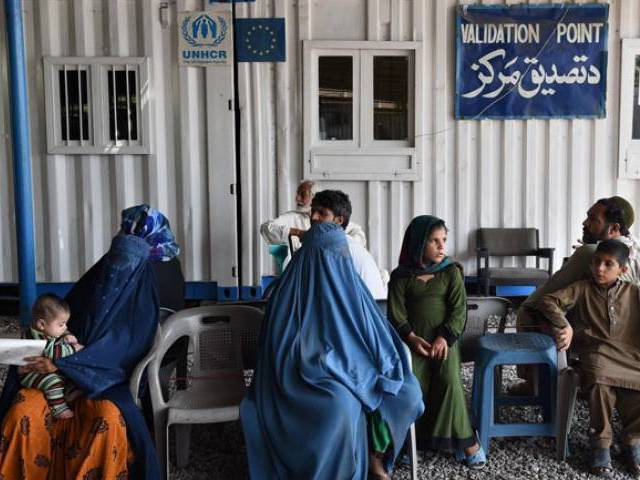 ISLAMABAD: Pakistan officially hosts the third largest refugee population in the world after Jordan and Turkey, sheltering some 1.4 million registered Afghans and, according to estimates, up to a million more residing without documentation.

Since 2009, Islamabad has repeatedly pushed back a deadline for Afghan refugees who arrived from the 1980s onwards to return to their home country, but fears are growing that the latest cut-off — March 2017 — will be final.

Here is a timeline of key events.

The exodus of Afghan refugees begins in late 1979 when Soviet troops invade Afghanistan to shore up the unsteady communist government and install their own president.

“I arrived in 1979, I lived my whole life here…. I am returning but my heart is crying, I am depressed,” Abdul Rab, a 46-year-old political activist originally from Jalalabad but who settled in Pakistan’s Peshawar, told AFP.

Foreign powers including the United States, Pakistan, Saudi Arabia and China meanwhile support the resistance mujahideen as the country plunges into a 10-year war that claims hundreds of thousands of lives.

“Our lives were in danger, we had no option but to flee,” Inamullah Khan, a grocery shop owner in Peshawar told AFP, adding that he lost many family members to the fight against the Russians.

The UNHCR estimates a total of 3.1 million flee to Pakistan over the course of the war and a similar number to Iran.

Following the withdrawal of the Soviet Union in 1989, Afghanistan’s mujahideen turn on each other in the struggle for power.

Fighting breaks out between the Northern Alliance, led by Ahmad Shah Massoud, and Gulbuddin Hekmetyar’s Hezb-i-Islami.

Despite the upheavals, a UNHCR report in 1999 found that two-thirds of the 6.2 million Afghans who fled to other countries during the Soviet invasion came home in the next decade.

Massoud is assassinated by the Taliban just two days before the September 11 attacks.

The United States then goes to war against the Taliban a month after their refusal to give up Al-Qaeada chief Osama Bin Laden, who claims responsibility for the attacks on New York and Washington.

US forces begin air strikes followed by the arrival of ground troops who ally with Massoud’s Northern Alliance to end Taliban rule. Hamid Karzai is selected to lead the interim government in December, ushering in a fresh period of optimism.

In 2006-7, Pakistan, with the support of UNHCR, formally registers some 2.15 million Afghans and hands them “proof of registration” cards validating their stay until December 2009.

The mid-2000s also see an intensification of the Taliban’s insurgency against US-led NATO forces particularly in their southern strongholds.

Refugees see their registration cards expire in 2009 but are permitted to remain thanks to annual extensions that have continued until now.

Since 2002, the UNHCR has assisted a total of more than 3.9 million Afghans in Pakistan to return home, the largest voluntary repatriation programme in the agency’s history — including 200,000 so far this year.

The agency attributes the increase to tighter border controls, an increase in monetary assistance to returnees (from $200 to $400), and an Afghan government public relations campaign.

The refugees have also come under increased scrutiny since a 2014 Taliban attack on a school in Peshawar that killed more than 150 people — with officials claiming the raid was planned in Afghanistan.

“The increase in the number of security operations against undocumented foreigners, including undocumented Afghans, has impacted refugees’ decision-making,” a UNHCR spokeswoman said.

Hurricane Matthew pummels Haiti and Cuba, evacuations ordered in US