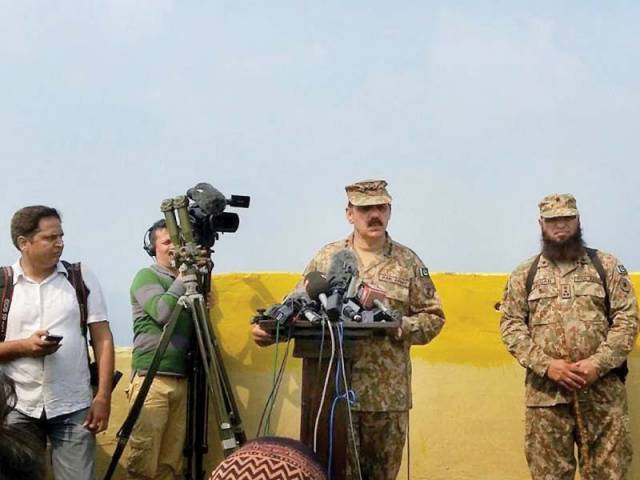 FORWARD LOCATIONS ALONG LOC: India has yet to come up with evidence to substantiate its claim that its special forces carried out ‘surgical strikes’ against so-called ‘launch pads’ of terrorists in the Pakistani side of Kashmir earlier this week. Indian officials are still tweaking the script of the loosely choreographed drama in a desperate bid to fix plot holes in the storyline. In the meantime, however, Pakistani military took local and foreign journalists on a rare visit to forward locations along the Line of Control to debunk the myth of Indian surgical strikes.

On Sept 29, Lt Gen Ranbir Singh, the director general military operations of India, claimed at a news conference that India’s special forces had conducted ‘surgical strikes’ across the Line of Control (LoC) to thwart attacks on some of India’s biggest cities — a claim immediately ripped to shreds by Pakistan’s military. New Delhi couldn’t sell its story internationally while at home, too, it was received by many with a dose of skepticism.

While India is reluctant to share details or evidence of its trumpeted strikes, Pakistan Army took the journalists to some of the sectors where the Indian military claimed special forces had decimated perceived ‘launch pads of terrorists’. “No such incident took place nor will we allow any such incident to happen in future,” Lt Gen Asim Saleem Bajwa, the director general of the Inter-Services Public Relations (ISPR), told the visiting journalists. “If the adversary attempted so, it will be responded with an ever stronger force,” he added.

The journalists were taken to mainly two spots of Boxor Formation and Hotspring Formation out of the 190-kilometre stretch of the LoC, where India claimed it forces had carried out the so-called surgical strikes. At both locations, which are about 50 kilometres apart, no signs of destruction or casualties were found except the two soldiers, who had been killed – one each at the two formations – due to unprovoked firing by Indian forces. Besides, nine soldiers who have since recovered from injuries and returned to their respective duties.

At the foothills of Boxor Formation, one can find two villages of about 130,000 inhabitants. None of them seem to have the slightest clue about any intrusion by Indian troops. But they do recall that crossfire had taken place on the particular night and nothing else.

The purpose of the embedded tour was to allow journalists to independently investigate the Indian claim. If the Indian military has really carried out a cross-border strike, then it should also open up their side of the LoC to the media. The journalists represented international media outlets, including CNN, BBC, VOA, Reuters, AP, AFP, News Week and BBC Urdu Service.

The chief military spokesperson said the Indian claims of carrying out surgical strikes across the LoC were absurd, baseless, and unfounded, which were meant to not only misguide the Indian people but also the international community. “No physical violation of the LoC has taken place, nor it will be allowed to happen by our resilient forces,” he said in reply to a question. “Pakistan Army is fully prepared to take on any misadventure and any such attempt will be responded in a more effective and forceful manner.”

GOC Bhimber Sector Major General Chiragh Haider apprised the journalists that no physical violation of the LoC happened on the night between September 28 and September 29 as claimed by India’s DGMO.

The journalists were earlier given a full picture of the geographical and physical location at the Boxor Formation by Brigade Commander Brigadier Furqan Moazzam. The entire scenario was drawn to make them understand how Indian forces had carried out unprovoked firing due to which a Pakistani soldier embraced martyrdom.

Meanwhile, Pakistanis and Indian forces exchanged fresh fire across the LoC, with Indian officials stating there was no damage. “Pakistani troops befittingly responded to Indian unprovoked firing” which started at 4:00 am and continued for four hours in the Bhimber sector on the Pakistani side of the LoC, a military statement said. It did not mention casualties.

“There was small arms fire and mortar shells fire from across the LoC in Akhnoor sector which lasted for around two hours,” Pawan Kotwal, a top civilian official in Indian occupied Kashmir told AFP. “No damage was caused. We are ready for any eventuality but it is peaceful in Jammu region.”

Tensions between the two arch rivals have been boiling since the Indian government accused Pakistan-based militants of launching an assault on an army base in Uri, IOK, earlier this month that killed 18 soldiers.

“This is a dangerous moment for the region,” Pakistan’s Ambassador Maleeha Lodhi told AFP after meeting with UN Secretary-General Ban Ki-moon at UN headquarters in New York.

Ban Friday offered to act as a mediator between New Delhi and Islamabad to defuse the tensions.

In a statement to AFP, India’s mission to the United Nations said “India has no desire to aggravate the situation,” and that “our response was a measured counter-terrorist strike”.

On Friday authorities in parts of northern India said they had started evacuating villages within 10 kilometres of the border following the raids earlier this week. India and Pakistan have fought three wars since they gained independence from Britain seven decades ago, two of them over the disputed Himalayan region of Kashmir.