Separate enclosure fails to fill up with women

Separate enclosure fails to fill up with women 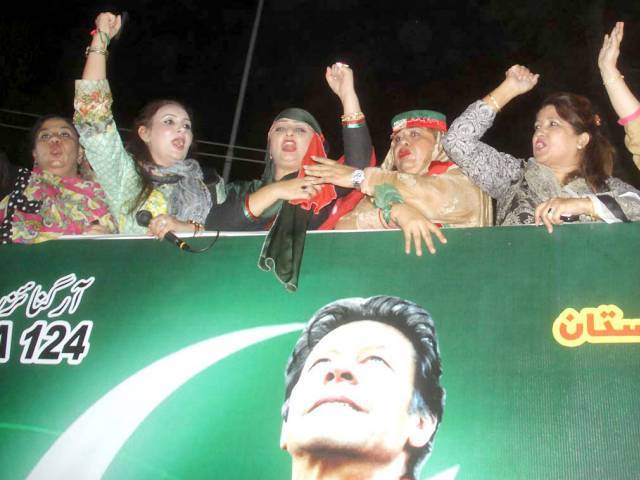 The party had reserved separate entry and exit points for its female supporters at the venue in an effort to avoid harassment of women which has almost become a regular feature at the PTI’s gatherings. PHOTO|: NNI

LAHORE: The separate enclosure set up especially for females at Adda Plot was not filled to capacity even by 8:30pm, despite hundreds of women coming in to participate in the Pakistan Tehreek-e-Insaf’s Raiwind March.

Secured by tin sheets and barbed wires, the enclosure provided seats for around 500 women. The night before the rally, PTI leaders had said arrangements would be made for around 5,000 people.

Over 150 women police officials were deployed at the venue at various checkpoints and walkthrough gates from Khayaban-e-Amin to the enclosure.

Women police officers were deployed to secure the enclosure which had been set up separately from the main venue.

Until 7pm, women wing officials had not made their way to the venue with party leaders.

A woman police officer told The Express Tribune that men accompanying female supporters were queued up outside and demanding entry into the enclosure.

She said they had received strict orders not to allow men inside.

Aaliya Hayee, a regular participant at PTI rallies, said stricter security measures had been taken as compared to previous rallies. “There have been incidents of men trying to enter the enclosure on the pretext of providing water bottles and snacks to the participants,” she said. “This should be looked into.”

Seemabia Tahir, a women wing official from Islamabad, said seating arrangements had only been made for the elderly. “We’re expecting more than 3,000 participants to occupy the venue,” she said. “This is less as compared to previous rallies as a lot of our supporters coming from other cities are being stopped on their way to the Adda plot.”

The party had reserved separate entry and exit points for its female supporters at the venue in an effort to avoid harassment of women which has almost become a regular feature at the PTI’s gatherings.