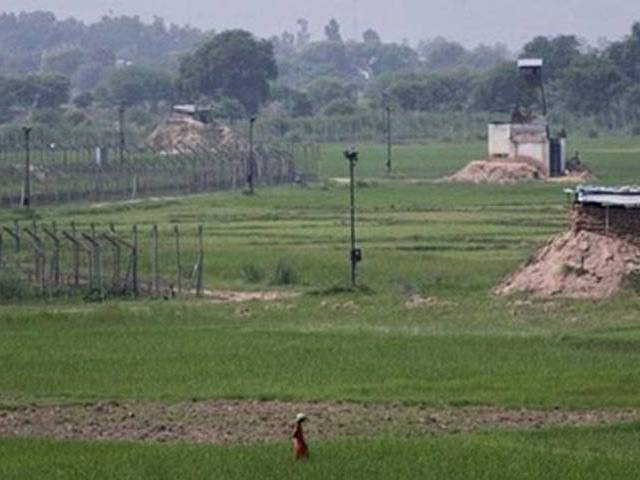 The fenced border between Indian and Pakistan. PHOTO: REUTERS/FILE

ISLAMABAD: The Indian army’s claim that it has carried out ‘surgical strikes’ on the Pakistani side of the Line of Control (LoC) begs the question: Is such a sophisticated and precision-guided operation possible in a highly militarised zone? Or, does the Indian military have the wherewithal to mount such an operation?

The de facto border that divides the Himalayan region of Kashmir into Pakistan and India is around 880 kilometres long. For decades, there has been a huge concentration of troops on both sides of the LoC. In recent years, India taking advantage of the 2003 ceasefire agreement has erected a fence along the LoC and of late employed the latest surveillance devices to stop any infiltration from the Pakistani side.

Since the Uri attack that heightened tensions and sparked fears of a possible military showdown, Pakistani Army has been on the ‘high state of alert’ to deal with any untoward situation. In this situation, was it plausible that special Indian forces intruded deep into the Pakistani side, carried out operation at multiple sites, stayed there for almost six hours, eliminated so-called ‘terror launch pads’ and then went back without even suffering any casualties?

The Indian army provided little insight as to how the entire operation was conducted. The media there, however, said the operation was a combination of heliborne and ground forces. Special forces were para-dropped for the operation, it added. It said alleged terror launch pads targeted were in the range of 2- 3 kilometres from the LoC.

Indian officials claimed that special forces targeted at least seven different places inside the LoC. This means, according to a Pakistani military official, a minimum of 70 Indian troops intruded and carried out the so-called ‘surgical strikes’.

“This looks a fantastic movie script,” said the official, who has the knowledge of LoC and terrain there.  “Do you think it was possible that more than 70 Indian soldiers were on our side of the LoC for hours and our forces couldn’t detect them,” asked the official. “This is just unbelievable story created by the Indian side for public consumption.”

Officially, Pakistan rebutted the Indian claim, insisting that there had been cross-LoC fire initiated and conducted by India. This, Pakistan Army pointed out, was existential phenomenon where the two countries often exchange fire at the LoC.

Defence analysts are also astonished at the Indian claim of conducting surgical strikes and that too at a time when relations between the two arch enemies are on the edge and any misadventurism may lead to a serious military conflict.

US urges restraint over Kashmir

Maj Gen (retd) Ejaz Awan finds the Indian claims that special forces were para-dropped as unbelievable. “So, if they para-dropped special troops, then how they pulled them out after they completed their so-called surgical strikes,” he questioned. “For pulling out these troops, you need helicopters on the ground,” he explained saying this was easier said than done.

Lt Gen (retd) Amjad Shoaib, who had also served at the LoC during his service, concurred with the assessment. He said intrusion was possible at some mountainous areas along the LoC, but to say that Indian special forces came and carried out ‘surgical strikes’ and went back undetected was “too good a story to be believed”.

“Surgical strikes can be conducted through airborne or artillery based precision-guided strikes or ground force based assaults; both of which require sophisticated intelligence collection, platforms to conduct collections, and surveillance of target sites and objectives,” military expert Shawn Snow wrote in The Diplomat magazine.

“India is still on the cusp of building a sophisticated and modernised asymmetrical capability to conduct counterterror operations, while much of its forces are still organised and trained on Cold War models,” he said.

“Over the last decade, India has spearheaded efforts to modernise her military to include domestic production of UAVs. Rostum I & II could provide India with an air platform capable of surgical strikes for target surveillance, and intelligence collection. However, these platforms are still in development.”

If this is the case, then it begs a question: why the Narendra Modi government presented a routine exchange of fire as ‘surgical strikes’? The reason, experts say, is that the Indian prime minister was under immense pressure to live up to his own promises that his administration would punish the Uri attackers.

Modi has launched a diplomatic offensive against Pakistan taking a series of steps such as boycotting the Saarc summit, threatening to review the water treaty as well as MFN status for Pakistan. But all those measures, he knew, would make little difference to Pakistan.

“Hence he [Modi] needs face saving,” said Gen Shoaib. By claiming that the Indian military carried out surgical strikes, Modi can now go to the public and hyper-nationalist media that he avenged the Uri attack.

This situation, many observers believe, would help Modi build his election campaign for the crucial state elections in politically important states such as Utar Pradesh next year.

When asked, a senior military official said Pakistan ‘does not foresee’ any escalation in tensions but added that the country’s armed forces were vigilant to face any threat.