SpaceX has said it plans to send an unmann­ed Dragon cargo capsul­e to Mars as early as 2018
By AFP
Published: September 28, 2016
Tweet Email 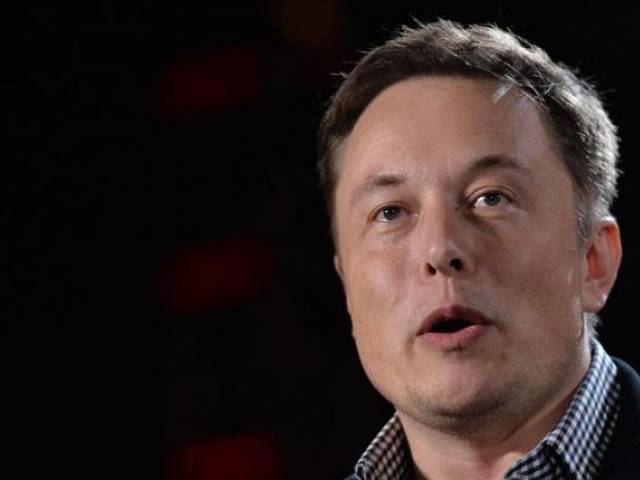 Elon Musk speaks about the Interplanetary Transport System which aims to reach Mars with the first human crew in history PHOTO: AFP

SpaceX chief Elon Musk unveiled on Tuesday ambitious plans to establish a “city” on Mars by sending humans on massive spacecraft with cabins, at a cost as low as $100,000 per person.

Taking the stage under a large globe of Mars at the International Astronautical Congress, Musk showed his vision for a giant rocket that would propel men and women to the Red Planet “in our lifetime.”

“We need to go from these early exploration missions to actually building a city,” he said to an overflow crowd at an expo center with a few thousand seats in the western Mexican city of Guadalajara. Musk showed a futuristic video depicting his concept of an interplanetary transport system based on re-usable rockets, a propellant farm on Mars and 1,000 spaceships on orbit, carrying about 100 people each. The spacecraft would have a restaurant, cabins, zero-gravity games and movies.

“It has to be fun or exciting. It can’t feel cramped or boring,” he said. The first flight would be expensive but the aim is “making this affordable to almost anyone who wants to go,” by dropping the price of a ticket over time to $100,000, Musk said.

Millions of tons of cargo would also need to blast off aboard a powerful rocket, which he described as a “scaled-up version of the Falcon 9 booster,” the company’s current rocket system that can land vertically. The South Africa-born Canadian-American entrepreneur said the plan would require a “huge public-private partnership” to establish a self-sustaining human civilization on Mars. Tesla Motors CEO Elon Musk speaks about the Interplanetary Transport System which aims to reach Mars with the first human crew in history, in the conference he gave during the 67th International Astronautical Congress in Guadalajara, Mexico  PHOTO: AFP

SpaceX has said it plans to send an unmanned Dragon cargo capsule to Mars as early as 2018, paving the way for a human mission that would leave Earth in 2024 and arrive on the Red Planet the following year. The rocket would take a spaceship into orbit, release it and land back on Earth to pick up a fuel tanker, which it would immediately take back up to the craft to fuel its journey to Mars, Musk said.

Once on Mars, humans would have to install a plant to produce propellant by using the planet’s methane resources to fuel the spacecraft for its return to Earth. Experts warn reaching Mars — 225 million kilometers (140 million miles) from Earth on average — and living there requires major engineering feats and a massive budget.

Prior to Musk’s presentation, John Logsdon, former director of the Space Policy Institute at George Washington University, said it was unlikely that Musk would meet the 2025 timeline, noting he has been overly optimistic about rocket schedules in the past.

“Bottom line is the cost. You’re talking of tens of billions of dollars and SpaceX doesn’t have that type of money,” he said. But retired astronaut Leroy Chiao said Musk has “amassed technical and operational experts, and SpaceX is generating revenue from satellite launches.”

“Elon Musk sets aggressive goals, and while he doesn’t always make the exact date, he is usually able to make those goals. I would say that it is possible, but aggressive,” Chiao told AFP. The US space agency NASA, which is also studying the effects of long-term space flight on the human body, has announced its own plans to send people to Mars by the 2030s.

SpaceX is not the only private venture dreaming about sending people to Mars.

“We want to have millions of people living and working in space in a decades timeframe if they want to,” Blue Origin president Rob Meyerson told AFP. The company, which has built another rocket that has performed vertical landings, is currently focusing on finding a way to get people to lower orbit “routinely and affordably,” he said. Blue Origin is in competition with British billionaire Richard Branson’s Virgin Galactic in the race to send tourists to space. But asked in Guadalajara whether Mars was an objective, Virgin Galactic chief executive George Whitesides said: “Richard and my view is that we are going to be pretty focused on planet Earth in the immediate future.” While Virgin Galactic unveiled a new winged spacecraft earlier this month, SpaceX and Blue Origin have focused efforts on rockets that can land vertically, a key breakthrough that could cut costs for space travel by making rockets reusable. SpaceX has designed the powerful Falcon Heavy rocket, which could send a manned Dragon spacecraft into space.

The company plans to launch the 70-meter (230-foot) tall rocket, which has a liftoff thrust equivalent to 18 Boeing 747 aircraft at full power, later this year. SpaceX was hit by a setback on September 1 when another rocket, the Falcon 9, exploded on the launch pad during a test in Florida.