Russia­n troops will be in the countr­y for two weeks from Septem­ber 24 to Octobe­r 10
By News Desk
Published: September 23, 2016
Tweet Email 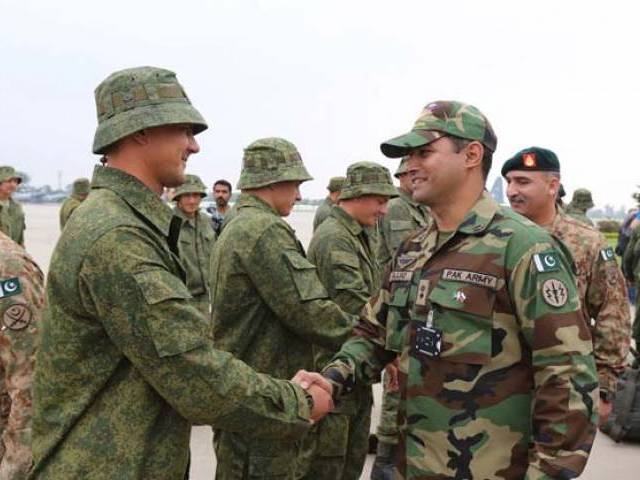 The Russian troops will be in the country for two weeks from Sep 24 to October 10 PHOTO: ISPR

In a first, Russian forces arrived in Pakistan on Friday to participate in joint military exercises.

In a first, Pakistan, Russia to hold joint war games

The Russian troops will be in the country for two weeks from September 24 to October 10. The joint military drill is seen as another step in growing military-to-military cooperation, indicating a steady growth in bilateral relationship between the two countries, whose ties had been marred by Cold War rivalry for decades.

Following the Uri attack in held-Kashmir, several Indian news sources claimed that Russia had called off the joint war games with Pakistan. However, Pakistan’s Ambassador to Russia Qazi Khalilullah on Monday denied that Russia had cancelled planned joint military drills.

Talking to The Express Tribune from Moscow, Khalilullah said the joint Pakistan-Russia military exercises will take place as scheduled. The first-ever military drills between the two former Cold War rivals – named ‘Friendship 2016’ – will start from September 24 and continue till October 7.

The development, Khalilullah said, reflected increased cooperation between the two countries. “This obviously indicates a desire on both sides to broaden defence and military-technical cooperation,” he separately told a Russian news agency.