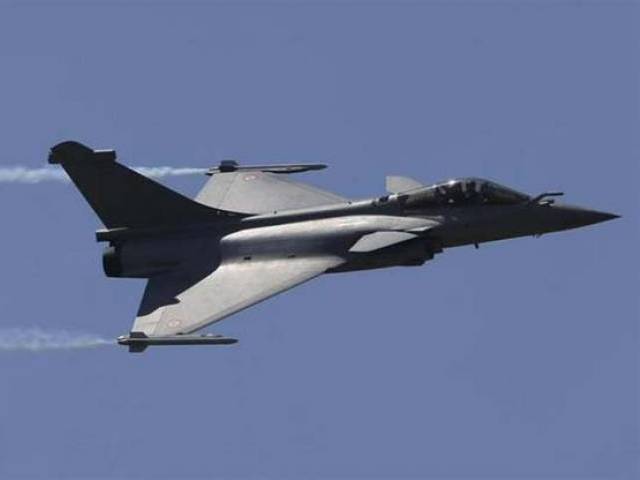 A Dassault Rafale fighter aircraft takes part in a flying display during the opening of the 50th Paris Air Show at Le Bourget airport near Paris June 17, 2013. PHOTO: REUTERS

NEW DELHI: An Indian cabinet committee gave its approval Wednesday to a long-delayed deal to buy 36 fighter jets from France’s Dassault, as the country looks to bolster its military in the face of China’s growing clout.

A senior Indian defence ministry official said Prime Minister Narendra Modi’s cabinet committee on security had given its green light to the multi-billion dollar Rafale jet purchase at a meeting in New Delhi and the defence ministers of both France and India would ink the agreement on Friday.

“The deal was approved at the meeting in the evening,” the official told AFP on condition of anonymity. “It will now be formally signed by Indian and French defence ministers on September 23 in New Delhi.”

The official said that other details including the exact amount and formalities “will become clear after the signing event”. While stopping short of confirming the deal, the French presidency also said that Defence Minister Jean-Yves Le Drian would head to the Indian capital on Friday.

In a brief statement, the presidency said that Le Drian’s visit had been “agreed in principle with Prime Minister Modi” when he met French President Francois Hollande at the G20 summit in China earlier this month.

There was no immediate comment from Dassault but a report by the Press Trust of India put the purchase price at around 7.9 billion euros (8.8 billion dollars).

The Rafale purchase was first mooted in 2012 but has faced major delays and obstacles over the last four years. India entered exclusive negotiations on buying 126 Rafale jets four years ago, but the number of planes was scaled back in tortuous negotiations over the cost and assembly of the planes in India.

Modi announced on a visit to Paris last year that his government had agreed in principle to buy the jets as India looks to modernise its Soviet-era military. But the deal continued to be held back by disagreements such as Delhi’s insistence that arms makers invest a percentage of the value of any major deal in India, known as the offset clause.

Hollande again pushed the deal on a visit to India in January, when he was Modi’s guest for the Republic Day celebrations, but officials privately acknowledged that price had become a sticking point.

In an interview ahead of that trip Hollande said that India needed new planes and “France has shown that it has the world’s best aircraft”.

The increasing assertiveness of its giant neighbour China as well as its simmering rivalry with Pakistan have increased India’s need to upgrade its military.

Manmohan Bahadur, a retired air vice marshal, said the Rafale would give India’s airforce a cutting edge that its rivals lacked. “It is a deal that should have happened much earlier. The Rafale beats any other fighter jet in the region,” Bahadur told AFP.

“Besides having absolutely cutting edge technology, it comes with beyond visual range missiles, which are also better than what both China and Pakistan possess. Its endurance, striking range and power stand out.”

Gulshan Luthra, from the New Delhi-based Institute for Defence Studies and Analyses, said the planes would deliver an important boost to India’s air force.

“The fundamental thing is the air force does not have new aircraft, the old ones need to be replaced and Rafale is a spearhead,” he said.

“Unfortunately, we have been very late on this deal. But this has been chosen and it’s a very good aircraft.”

The highly versatile Rafale is currently being used for bombing missions over Syria and Iraq as part of international campaign against the self-styled Islamic State group.

It has also been deployed in the past for air strikes in Libya and Afghanistan.

The deal, if confirmed, is a major vote of confidence in the Rafale which had long struggled to find buyers in overseas, despite heavy lobbying efforts by the Hollande administration.

It is the biggest order for the Rafale after Egypt agreed to buy 24 of the jets in 2015 and Qatar purchased the same amount later that year.