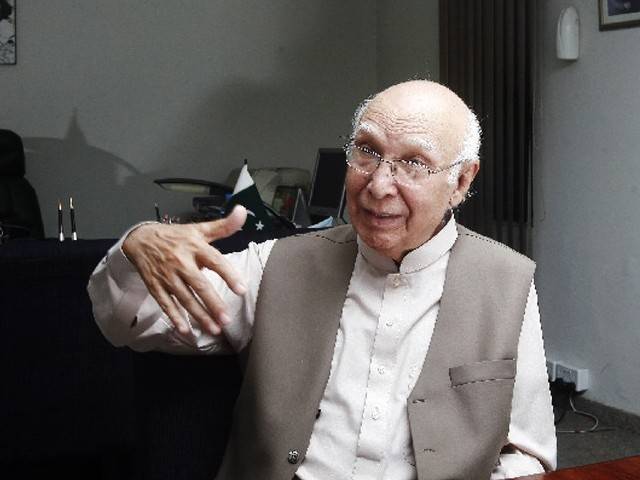 Sartaj says it is deplorable that India chose to blame Pakistan for the attack before carrying out formal investigation. PHOTO: REUTERS

Prime Minister Nawaz Sharif’s senior aide Sartaj Aziz on Monday said the attack on an Indian military base in Kashmir was a blatant attempt on New Delhi’s part to deflect attention from the situation in Indian Kashmir.

Rejecting India’s claims of Pakistan’s involvement in Sunday’s attack as ‘baseless’ and ‘irresponsible’, Aziz said, “It is a blatant attempt on India’s part to deflect attention from the fast deteriorating humanitarian and human rights situation in Indian Kashmir since the death of Burhan Wani.”

Aziz further said it needs to be understood that the situation in IOK is not of Pakistan’s making but a direct consequence of illegal Indian occupation and a long history of atrocities that has resulted in several deaths.

“Pakistan has noted with serious concern the recent spate of vitriolic and unsubstantiated statements emanating from Indian civil and military leadership in the aftermath of yesterday’s attack on Indian occupation forces in the Uri sector of IOK,” he added.

Taking a jibe at the Indian government, Aziz further stated that it was particularly deplorable that India chose to blame Pakistan for the incident before carrying out formal investigation. “The statement is part of a pattern to mislead world opinion and cover up India’s reign of terror in IOK,” he said.

The adviser’s statement comes a day after Pakistan strongly denied any role in Sunday’s attack on the Indian military base in the disputed Kashmir region as it put border guards on ‘high alert’ amid fears of potential military escalation between the two countries. In a knee-jerk reaction to the attack on the brigade headquarters in Uri, India’s civil and military leaders squarely blamed Pakistan with media commentators calling for a military response.

The Inter-Services Public Relations (ISPR) confirmed the hotline contact but said Maj Gen Mirza refuted the ‘unfounded and premature’ Indian allegations and asked his Indian counterpart to share any actionable intelligence. He made it clear that no infiltration was allowed from Pakistan’s side because ‘water tight’ arrangements were in place on both sides of the Line of Control and Working Boundary.

Speaking to reporters in Srinagar, Lt Gen Singh claimed that the four militants involved in the Uri attack were foreigners and linked with the Jaish-e-Muhammad militant group.