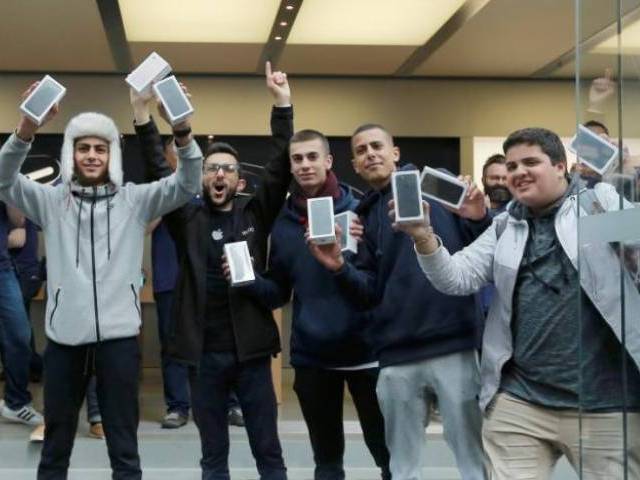 The first customers to walk out of Australia's flagship Apple store with the new iPhone 7 react for the press in Sydney. PHOTO: REUTERS

SAN FRANCISCO: Apple’s global iPhone launch was marked by excitement and frustration as fans queued to find scarce models of the coveted smartphone.

Scenes in Apple stores around the world were reminiscent of days before online ordering became a norm and people camped out for days to be the first to get hands on the California company’s iPhone 7 and 7 Plus.

Enthusiasm was peppered with disappointment due to shortages of the large-screen iPhone 7 Plus and a jet-black iPhone 7, but it was unclear if the shortages were the result of strong demand or limited supply.

“These initial sales will be governed by supply, not demand,” Apple said in a released statement, which noted that the company would not provide launch weekend sales figures.

Investors evidently weren’t certain of what to make of the launch as well, with Apple shares down about half-per cent to $114.92 at the close of trading on the Nasdaq exchange.

BTIG research said in a note to investors that, despite a lack of lines, analysts there expected iPhone sales in the final quarter of this year to grow 3.6% to 77.5 million.

At the Apple Store in the Georgetown district of the US capital Washington, dozens of consumers were still waiting in line hours after the store opening to get the new handsets.