Scientists reveal most accurate depiction of a dinosaur ever created

Scientists reveal most accurate depiction of a dinosaur ever created 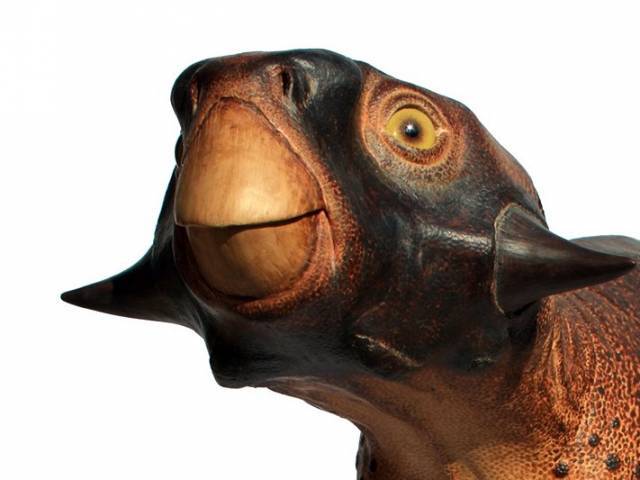 Psittacosaurus fossils are commonly found across most of Asia. A story of the Psittacosaurus specimen was carried out by a team led by Dr Jakob Vinther of the UK’s University of Bristol.

The reconstruction is the culmination of around three months’ work, from detailed drawings to finished fibreglass model.

“This is where the subject finally comes to life,” Paleoartist Bob Nicholls’ explains, “by adding all the skin details such as scales and wrinkles, and beaks and horns.”

“The most surprising features include an unusually large and wide head, highly pigmented clusters of scales on the shoulders, robust limbs, patagiums (skin flaps) behind the hind limbs, and a highly pigmented cloaca.” These features make him confident this is the most accurate reconstruction ever produced: “When the anatomy surprises me – it confirms that I’ve followed the fossil evidence rather than any preconceived ideas of my own.” The relatively large brain of Psittacosaurus leads scientists to suspect it may have been a relatively smart dinosaur, with complex behaviours. The large eyes hint that it had good vision.

The Psittacosaurus specimen Vinther’s team studied is held at the Senkenberg Museum in Frankfurt. It is a complete skeleton from one of the world’s best -preserved fossil deposits in China. To get a clear picture of the pigments in the dinosaurs’ skin, Vinther’s team fired a laser at the specimen to highlight fluorescent materials (calcium phosphate) remaining preserved from the animal’s scales. The dinosaur takes its name from the Psittacines, the parrots, because of its parrot-like beak and skull. “Parrots and Psittacosaurs might look the same superficially, but the idea that they had the same muscle arrangements just seemed a little far-fetched,” explained Adam Taylor, recent MSc palaeobiology graduate from the University of Bristol. “The Psittacosaur beak is more rounded so bite force is spread over a greater area. If this parrot-like musculature were to arise in one species, you would expect to see evidence for it elsewhere in the lineage – we don’t.” “We had only looked at feathered dinosaurs and ones that are close to birds and lived in trees, which is a very different mode of life than this ground dwelling dinosaur,” explains Vinther. “This little guy was clearly exhibiting camouflage on most of its body – except for the strong pigmentation in the face, which might actually be for show rather than concealment.”

This article originally appeared on Guardian.