KiK has agreed to pay $5.15 millio­n as compen­sation to the victim­s
By Our Correspondent
Published: September 11, 2016
Tweet Email 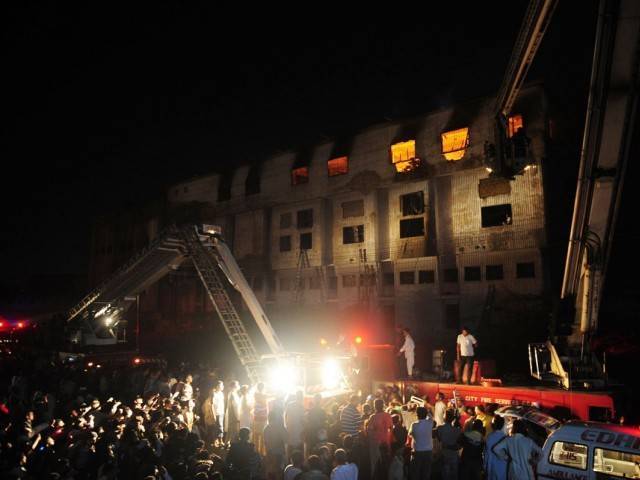 KiK has agreed to pay $5.15 million as compensation to the victims. PHOTO: AFP

KARACHI: The case is being heard by the Regional Court of Dortmund, Germany. Recently, the court has issued an initial decision, accepting jurisdiction over the case and granting legal aid to the claimants to cover the lawsuit cost, informs EECHR vice-legal director Miriam Saage-Maass, adding that the decision is the first step towards dealing with the human rights violations committed abroad by the German companies.

According to the order, a translated copy of which has been obtained by The Express Tribune, the court has directed to collect evidence as well as a written legal opinion on Pakistani law concerning the situation.

The court has also sought information on different subjects, including if there is a legal foundation in Pakistani law for the liability of the respondent – KiK.

Since the case has raised eyebrows around the world, there has been table talk to settle the matter out of court, with one such ruling announced a few days ago.

According to NTUF deputy general secretary Nasir Mansoor, KiK has agreed to pay $5.15 million as compensation to the victims. An official announcement in this regard is due on Sunday (toady) by the victims’ organisation, he added.

“It is a historic decision. Our movement has paid off but still more needs to be done to avert such incidents.”

The new development seems to be the result of an outcome of the pressure on KiK through various actors, including the German government itself.

During some of the victims’ visit to Germany in June this year, the country’s lawmakers had pledged to support them in their cause. The talks in which the latest decision of compensation was taken were held in Geneva. Before this, a delegation of the ILO visited Pakistan to make assessments of the victims’ claims for compensation.

The involvement of international actors is also evident from a KiK statement which it emailed to The Express Tribune. In it, the company’s corporate communication officer, Olga Bakanow, had stated that the company did not bear any responsibility for the fire as it believed it was an act of arson over nonpayment of extortion. The company claimed that the responsibility to support those affected falls on the Pakistani government.

Four years on, the Pakistani government has, however, given little or no importance to the case, according to the victims’ lawyer, Salahuddin Panhwar. He criticised the new charge sheet which blames five people:  Muttahida Qaumi Movement’s Hammad Siddiqui, Rehman alias Bhola and three others who are yet unidentified.

The case has been put on the backburner, Panhwar believes, adding that exonerating factory owner Abdul Aziz Bhaila, his sons Arshad and Shahid and others benefits the real culprits. “Most of the deaths were caused as the labourers could not find a way to escape the flames. The gates were closed, the windows were sealed – these facts are on record. Moreover, the factory and most of its workers were not registered with the relevant authorities,” he claimed.

The counsel questions the role and responsibility of government officials who were supposed to keep a check on the working conditions and labour rights in the factory.

He says the victims will challenge this move [fewer accused] in court. “There are sufficient evidences that the factory was a death knell with no emergency exit and precarious working conditions.”

Of the dozens who survived the fire, most became paralysed or developed various diseases after inhaling the thick smoke that had filled the multi-storey factory.

A young man, Muhammad Hanif, who escaped along with others by jumping off the first floor, describes the tale.

“The emergency exits at the factory were non-existent. They opened into nothing. There was no staircase attached to it.”

The factory, located off the Hub Chowki Road, still stands as a stark reminder of that fateful evening. That day, four years ago, the labourers were eagerly awaiting their wages. Some had to pay their rents and bills while others, like Ayaan, may have planned to buy something for his mother. None of them could finish their errands or fulfill their dreams.