Around 24 terror­ists also held; in a separa­te operat­ion in Kacha Jamal area a huge cache of Indian made arms seized­
By Our Correspondent
Published: September 10, 2016
Tweet Email 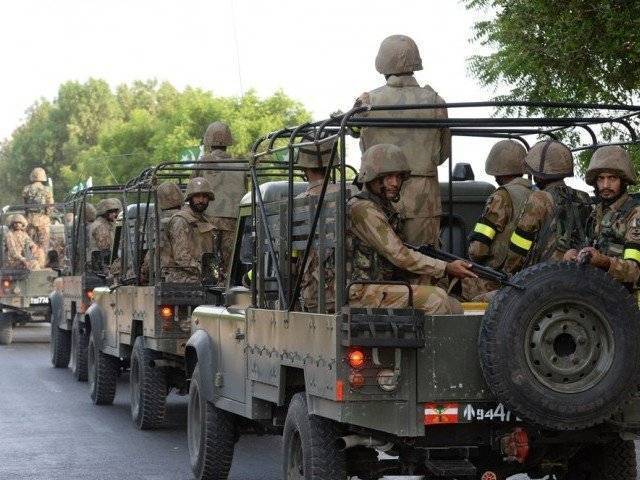 RAJANPUR: At least four terrorists and a security personnel were killed during a grand operation carried out by paramilitary forces in Punjab’s Rajanpur district on Saturday.

Around 24 suspected terrorists were taken into custody and a huge cache of arms were recovered from their possession during the combing operation in Geyandari tribal area. Counter-Terrorism Department (CTD) officials said that 12 terrorists among the arrested 24 were seriously wounded.

Five helicopters of Pakistan Army also participated in the operation and carried out strikes to target terrorists’ hideouts.

On April 15, the army took command of the operation in Rajanpur, codenamed Zarb-e-Aahan, in an effort to rid the area of notorious gangsters.

In another development, operation was conducted in Kacha Jamal area on the information extracted from Ghulam Rasool alias Chotu, head of Chottu gang, and recovered a large number of Indian made weaponry which was buried underground.

Chottu had told law enforcement agencies during investigation that he had kept a huge cache of weapons underground in the area of Kacha Jamal.

Officials said that Rangers have completed all preparation to conduct operation after Eidul Azha in five districts of South Punjab including Dera Ghazi Khan and tribal areas of Rajanpur.