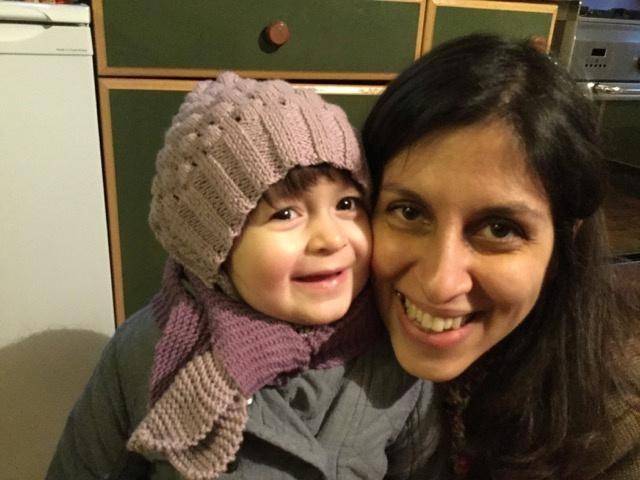 Nazanin Zaghari-Ratcliffe and her daughter Gabriella pose for a photo in London, Britain February 7, 2016. PHOTO: REUTERS

An Iranian Revolutionary court has sentenced Iranian-British aid worker Nazanin Zaghari-Ratcliffe to five years in prison on charges that remain secret, her family said on Friday.

Zaghari-Ratcliffe was detained in early April as she tried to leave Iran after a visit with her two-year-old daughter.

The official charges against her have not been made public and the Iranian authorities were not immediately available for comment.

“On 6 September Nazanin was sentenced to five years imprisonment by Judge Salavati of the Revolutionary Court,” her family said in a statement.

“Nazanin confirmed this sentence to her husband in a phone call today (9 September). She is expected to serve her sentence in Evin prison,” the statement added.

Her husband Richard Ratcliffe said in the family’s statement: “A sentence with secret charges still seems crazy. Literally it is a punishment without a crime.”

The Foundation and her husband have dismissed the Revolutionary Guards’ accusation.

Arrest of several dual-national Iranians could be politically motivated

The 37-year-old, who appeared in court for the first time in August, according to Iranian media and her family, was arrested at Tehran’s Imam Khomeini International Airport as she tried to leave Iran after visiting her parents.

She was separated from her two-year-old daughter, Gabriella, who has remained in the care of her grandparents.

Several Iranian dual nationals from the United States, Britain, Canada and France have been detained in the past few months on various charges, including espionage or collaborating with a hostile government.

“I have instructed the Thomson Reuters Foundation’s lawyers to find out what these charges are and I know that Nazanin’s family has asked the same of their lawyer in Iran,” she said in a statement.

“We continue to work very closely with Richard, the UK Foreign Office and the British authorities to find a resolution to this terrible situation,” she added.

In a statement, Britain’s Foreign Office said: “We are deeply concerned by reports that Mrs Zaghari-Ratcliffe has been sentenced without confirmation of the charges made against her.”

Senior British officials, including Prime Minister Theresa May, had raised the case with Iran and would continue to do so, it said, adding that London will press for consular access to Zaghari-Ratcliffe and was ready to help secure her daughter’s return to Britain.