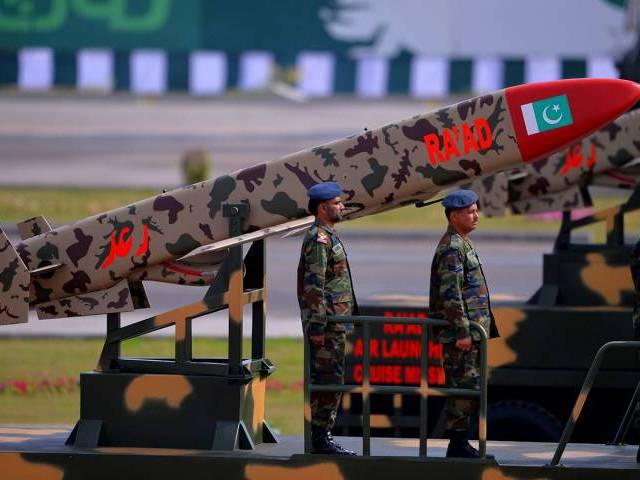 Pakistani army soldiers travel on a vehicle carrying cruise missile Ra'ad during the Pakistan Day military parade in Islamabad on March 23, 2016. Pakistan National Day commemorates the passing of the Lahore Resolution, when a separate nation for the Muslims of The British Indian Empire was demanded on March 23, 1940. / AFP PHOTO / AAMIR QURESHI

ISLAMABAD: Belarus and Kazakhstan have assured Pakistan of their support for its membership bid for the 48-nation Nuclear Suppliers Group as Islamabad launched a diplomatic push to woo support of the bloc’s members.

The efforts come months after the Nuclear Suppliers Group (NSG) had failed to reach consensus on allowing India and Pakistan into the group after several members of the international nuclear trade bloc insisted that members should adhere to the Non-Proliferation Treaty (NPT) condition for entry.

A statement issued by the Foreign Office in Islamabad said that Fatemi, travelling as a special envoy of the prime minister, briefed his interlocutors about Pakistan’s application for membership for the NSG and sought Belgium’s support in this regard.

Presenting Pakistan’s point of view, Fatemi reiterated that Islamabad’s application for the NSG was based on solid grounds of technical experience, capability and commitment to nuclear safety and security.

The special assistant emphasised the need for adopting a non-discriminatory and objective approach while considering membership applications for NSG since it directly impacted the strategic stability in South Asia as well as the future of the global non-proliferation regime.

In an interview with Radio Pakistan, Fatemi said Belarus and Kazakhstan already assured their support for Pakistan to become a member of NSG.

Pakistan formally applied for the membership of NSG in May in response to India’s bid seeking formal entry into the nuclear trading club.

Apart from seeking support for NSG membership, Fatemi has also been tasked with raising the current Kashmir unrest with key European countries.

India fails to get NSG membership

The Foreign Office statement confirmed that the Belgian side was also apprised about the current situation in Kashmir.

The special assistant voiced Pakistan’s deep concern about the massive human rights violations being committed by security forces in Indian-controlled Kashmir and urged the international community to play its role in urging India to respect the basic rights of the people of disputed Himalayan state and to ensure their right to self-determination, as enshrined in the relevant UN Security Council resolutions.