The 2,000-mile US-Mexico border runs from the Atlant­ic Ocean to the Pacifi­c
By AFP
Published: August 28, 2016
Tweet Email 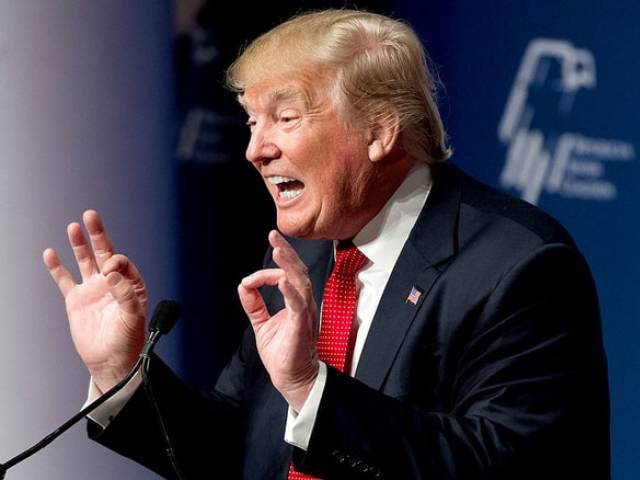 WASHINGTON DC: Even as Donald Trump vacillates between toning down his harsh anti-immigrant rhetoric and reaching out to minorities, he remains unshakable on one central campaign promise: building a wall on America’s southern border with Mexico.

“We are going to build a great border wall to stop illegal immigration, to stop the gangs and the violence, and to stop the drugs from pouring into our communities,” the Republican presidential candidate said as he accepted his party’s nomination last month.

It’s an idea experts say is as useless as it is unrealistic. Though that has hardly given Trump pause.

“I will build the greatest wall that you have ever seen,” he elaborated at a recent rally. “That’s a Trump wall, a beautiful wall!”

“And who’s going to pay for it?” he asks at his events.

“Mexico!” his energized supporters roared back.

Trump says his success as a construction magnate guarantees he can build such a wall but has provided few details.

The 2,000-mile (3,200-kilometer) US-Mexico border runs from the Atlantic Ocean to the Pacific, crossing arid, sparsely populated territory as well as urban centers thick with inhabitants.

After initially promising to build a new barrier running the entire length of the border, Trump now says only half actually needs to be covered because the physical terrain acts as a natural barrier along the rest.

“The wall just got 10 feet higher!” he’s said when Mexican officials repeated that their country has no intention of paying a dime.

Trump vows crackdown on immigrants who overstay visas if elected

However, architects and engineers dismiss that figure as entirely unrealistic given even the minimum predictable costs.

The wall would require foundations deep enough to ensure stability and discourage tunneling.

A 40-foot concrete wall using a “post and panel” system sunk 10 feet below ground would cost at least $26 billion, according to the Texan wall expert Todd Sternfeld.

Obstacles in the way of the Great Wall of Trump, as he’s called it, don’t stop there.

In the vast American South, border areas are often private property. Securing the land for a wall would require multiple expropriation procedures and legal headaches.

It has been tried before. The border already is bristling with barriers and fences, much of it built through the $2.4 billion Secure Fence Act signed by former president George W. Bush in 2006.

The Rio Grande River, which forms the border between Mexico and Texas, presents another major obstacle.

Clinton tops 50% support from US voters in latest poll

Laws prohibit construction that would impede flood management or interfere with the sharing of resources.

A treaty meanwhile prohibits either countries from diverting any flow of water.

But beyond the multitude of intractable obstacles facing a Trump wall, its basic sense remains highly questionable.

“If you build a 30-foot wall,” the comedian John Oliver has said, “all it’s going to do is create a market for 31-foot ladders.”

Critics point out that drug traffickers have found ways of transporting their products over or under border barriers whatever their size.

Moreover, as a 2006 study by the Pew Hispanic Center found, nearly half of illegal immigrants in the United States enter through classic entry points such as airports before simply staying on their expired visas.