Shooti­ng lasted for more than an hour after the assaul­t began at around 6:30pm.
By Agencies
Published: August 25, 2016
Tweet Email 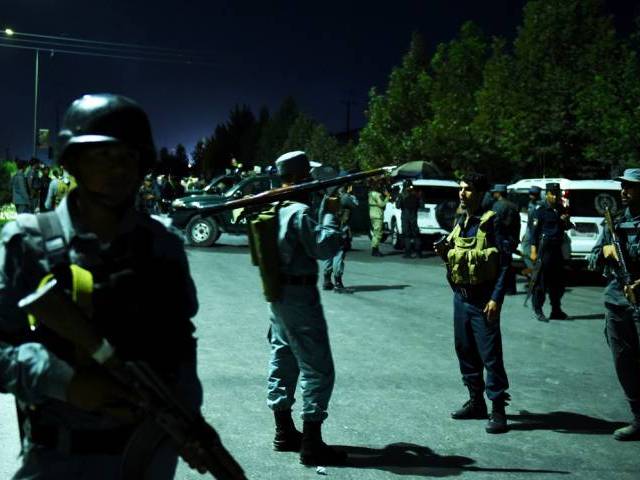 An Afghan security personnel (C), holding a rocket-propelled grenade, stands guard near the site of explosion that targeted the elite American University of Afghanistan in Kabul on August 24, 2016. PHOTO: AFP

KABUL: Explosions and gunfire rocked the elite American University of Afghanistan in Kabul on Wednesday after several gunmen stormed it leaving at least one dead and 14 injured.

Afghan special forces, assisted by US troops, responded to the attack.

No one has claimed the university attack yet though early reports suggested that several gunmen were involved, official said.

“Several gunmen attacked the American University in Kabul and there are reports of gunfire and explosions,” an interior ministry official said.

News on casualties was sketchy, but Mohammad Saleem Rasouly, head of hospitals in the Afghan capital, told Reuters that at least one student had been killed and 14 wounded.

The interior ministry official said that elite Afghan forces had surrounded the university compound, where shooting lasted for more than an hour after the assault began at around 6:30pm.

The quest for democracy