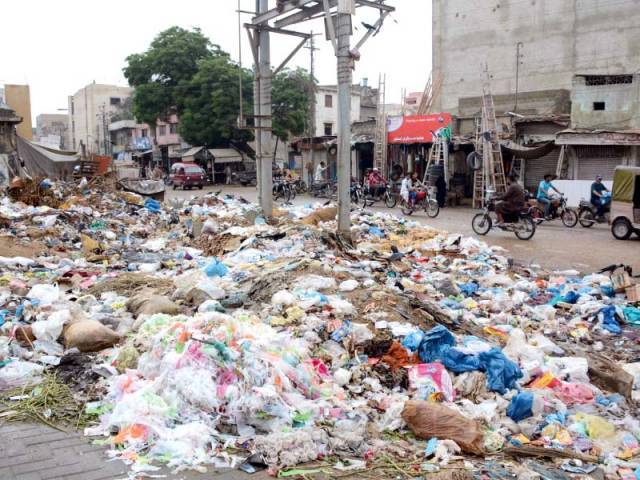 Civic experts believe that many things that are thrown away as garbage can be recovered and recycled into value-added products. PHOTO: FILE

KARACHI : Even if citizens try to keep their streets clean, they still have to dump their garbage at some place. Collection and disposal of garbage is a major issue being faced by the public, which cannot be solved without the government’s help.

This was the general theme of a discussion on Karachi’s garbage crisis by civic experts at the Aga Khan University on Thursday.

Piles of garbage lying unattended in the streets, parks, playgrounds, alleyways and the coast speaks volumes about the government apathy in dealing with the menace of waste disposal, agreed urban planners.

“Since there is a total vacuum from the government’s side, we should create a network of NGOs, civil society and communities to solve the garbage problem,” remarked urban planner Farhan Anwar.

Sharing data from a book, associate professor of urban studies at the department of social sciences and liberal arts, Institute of Business Administration, Nausheen Anwar, said that among 20 waste-producing countries in the world, Pakistan is number 16.

“We live in an era of consumerism which means lots of waste is generated. Hence there is a dire need to change our lifestyles,” she stressed.

Nausheen said waste could be made productive as recycling is a big industry, adding that the government, citizens and communities will have to play their roles in dealing with solid waste. “The livelihood of ordinary people is associated with recycling industry but waste management methods in the country are poor,” she explained.

The main issue with solid waste management is that we consider solid waste as mere waste – kachra – while it should be considered a resource, said Farhan.

He explained that waste must be categorised as ‘organic’ and ‘inorganic’. Organic waste comprises food and kitchen waste while inorganic waste consists of paper, plastic and metal. He added that many things that we throw away as garbage can be recovered and converted into value-added products.

In addition to Farhan’s point, Nausheen said, “We need to find the connection between garbage and business,” adding that waste is also consumed to produce energy.

“We produce thousands of tonnes of solid waste but there is no reliable data about the amount of solid waste the city generates daily,” Nausheen pointed out.

An architect from Indus Valley School of Arts and Architecture, Ahmed Mian, said waste management is a totally unregulated sector in Karachi. “We need to differentiate between garbage and recyclable materials,” he said, adding to the argument made by the other two speakers. Talking about architectural debris waste, he said construction of buildings produces a lot of garbage but we don’t know how to manage it.

The experts were of the view that recycling is not practiced in the country. Therefore, dumping and trash burning are common near our homes. Moreover, burning trash can pose a serious health concern. Farhan said nobody really knew what sort of health problems can be caused by burning garbage in the open air, pointing out that no authentic research had been done on the subject as yet.