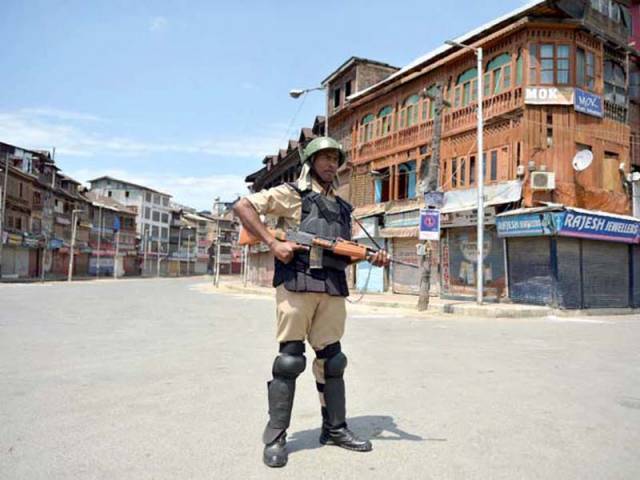 An Indian paramilitary soldier stands guard in a market during a curfew in Srinagar. PHOTO: AFP

NEW DELHI: In what appears to be a desperate attempt to counter Pakistan’s effective diplomacy on the disputed region of Kashmir, India’s Prime Minister Narendra Modi took aim at ‘supporters of terrorism’ in his Independence Day speech on Monday, ratcheting up criticism of Pakistan.

While the Indian leader, who belongs to the hardline Bhartiya Janata Party, delivered the speech from the ramparts of the Red Fort in Old Delhi, deadly violence flared in Kashmir where people observed a black day to protest Indian rule on Monday.

Modi referred to purported messages of support he claimed to have received from people in regions of Pakistan, including Balochistan, which has been hit by ethnic, sectarian and militant violence for the past decade or so.

“People of Balochistan, Gilgit and Pakistani Kashmir have thanked me a lot in past few days, I am grateful to them,” Modi said. A few days back, Modi had said, “The time has come when Pakistan shall have to answer to the world for the atrocities committed by it against people in Balochistan and Kashmir.”

This was the second time in less than a week that Modi made a reference to Balochistan. New Delhi is apparently upset at Pakistan’s diplomatic initiative to expose blatant human rights violations by Indian forces in the disputed region of Jammu and Kashmir.

In order to counter this diplomatic offensive, the Indian government is now aggressively raising the issue of Balochistan, which analysts believe, has no link with the Kashmir dispute. Chief Minister of held Kashmir Mehbooba Mufti holds the Indian flag after it fell from a flagpole during a flag-hoisting ceremony in Srinagar on Monday. PHOTO: AFP

Kashmir has witnessed the worst violence in nearly 16 years since a July 8 encounter in which security forces killed a young popular separatist leader Burhan Wani. Tens of thousands of Kashmiris had participated in the funeral of Wani, while funeral prayers in absentia had been offered at several places in the disputed region.

India, however, called Wani a terrorist from Hizbul Mujahideen, the largest indigenous separatist group of Kashmir, and blamed Pakistan for fuelling unrest in the region.

As of Monday, at least 70 people had been killed and thousands hurt in clashes with security forces. Modi met national party leaders on Friday to seek ways to end the worst unrest in Kashmir since 2010.

Modi also referred to Azad Kashmir and Gilgit-Baltistan, through which the $46-billion-dollar China-Pakistan Economic Corridor is expected to run, extending south through Balochistan to the port of Gwadar on the Arabian Sea.

“Modi’s statement is meant as much for Beijing as for Islamabad,” journalist Prashant Jha wrote in an opinion piece for Indian newspaper The Hindustan Times. Modi’s remarks directed at Pakistan overshadowed comments in his Independence Day address in which he touted his government’s achievements in rural electrification, financial inclusion and health provision.

Meanwhile Kashmiris observed a shutdown on India’s Independence Day to protest against Indian occupation, and staged rallies in different parts of the valley in support of Pakistan. Indian forces fired gunshots and tear gas shells in an attempt to smash the anti-India protests.

The state’s first woman chief minister, Mehbooba Mufti, called on India and Pakistan to make the Line of Control (LoC) irrelevant to bring peace in the region. “I appeal to both countries that this line dividing Kashmir should be made irrelevant,” Mufti told a thinly attended gathering at a sports stadium in Srinagar.

She blamed the Indian leadership for the current crisis in Kashmir and appealed to protesting youths to return to their schools and colleges.

The main event at the fortified arena was marred by spectators booing the chief minister after the Indian flag fell to the ground as she tried to hoist it, prompting authorities to order a probe to determine if it was the result of an act of sabotage.

“Thousands of people defied a curfew and took to streets in Kulgam, Islamabad, Pulwama, Bandipora and other districts of the occupied valley and raised high-pitched pro-freedom and pro-Pakistan slogans without taking care of the Indian reign of state terrorism,” Haider told a rally in Muzaffarabad.

The rally was staged to mark India’s Independence Day as a black day in the state capital. Jamaat-e-Islami Ameer Sirajul Haq especially participated in the gathering. Senior Kashmiri politicians, including members of the AJK Legislative Assembly, were in attendance.

Protest rallies and functions were held in different world capitals to highlight various dimensions of the Kashmir dispute and Indian atrocities on innocent Kashmiris.