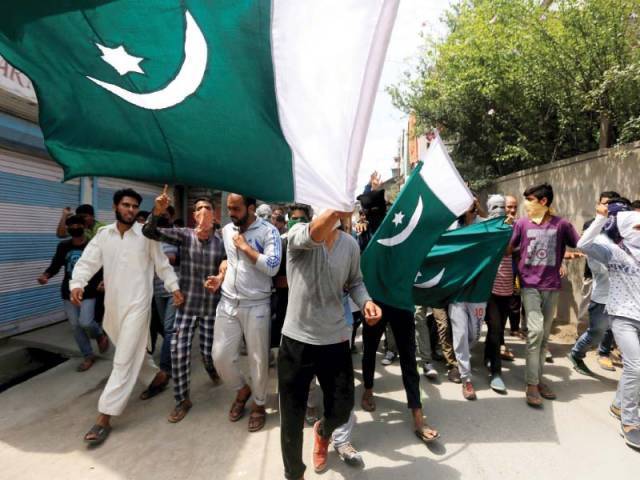 Pakistani flags hoisted and carried during a rally in Srinagar, Kashmir. PHOTO: REUTERS

On August 14, Kashmiris living across Jammu and Kashmir will organise referendum marches and offer special prayers for the stability of Pakistan, according to the latest ‘protest calendar’ issued by the joint committee set up by the three prominent pro-freedom leaders – Syed Ali Geelani, Mirwaiz Umar Farooq and Yasin Malik.

A day later, on August 15, the Indian Independence Day will be marked as a black day with civil curfew – a day-light voluntary restraint on public movement. The protest calendar also recommends people wear black dresses or black bands on the day and raise black flags on houses, shops, market centres and local squares.

Kashmir cause cannot be suppressed through violence, Nisar tells India

The independence of India and Pakistan has brought unceasing tragedies to Kashmir. There are several versions of history, often contradictory. One of the popular Kashmiri narratives blames Jawaharlal Nehru for hatching a guileful plan in collaboration with Kashmir’s Sheikh Abdullah whose burning personal ambition coupled with his lack of equation with Quaid-e-Azam Jinnah led to the current stalemate.

Ever since, India has introduced a litany of measures, from inducements to incarcerations, military threats to murders, collective punishments to draconian laws, to control and manage a restive population whose political aspirations she has failed to address.

Only a few days back, when the ongoing uprising completed a month, the Indian Prime Minister, Narendra Modi, offered to assuage the incited feelings of Kashmiris through ‘development’, an all encompassing catchphrase of absolute vagueness. The announcement, as expected, failed to provoke any consequence but outright disdain.

During the last 70 years of occupation, India has continually reduced the political and cultural autonomy of Kashmiris, chipping away at their freedoms and identity. She has introduced several measures to force changes in demography, and erase the distinct and unique cultural markers of Kashmiris in order to assimilate their portfolio of aspirations, hopes and dreams under the leviathan that produces unfamiliar and enforced attachment. This has, no doubt, transformed the character of the problem by reducing the Kashmiri population in aggregate terms and compelled some sections of people to acquiesce to the oppressive demands of the militant Indian nationalism. However, most people have not withdrawn their yearning for Pakistan or, to say the least, their fondness for the country of their utopian dreams.

Torn between coerced loyalty to the Indian state and their unfettered but perhaps irrational love for Pakistan, Kashmiris negotiate a complex binary on a daily basis and with devastating results. Since 1947, thousands have died in unsuccessful and cyclical rebellions while hundreds of thousands have been incarcerated under tyrannical laws to stifle their sentiments. Even senior government employees and politicians, including the former Prime Minister and later a Chief Minister, Sheikh Abdullah, had to endure long prison sentences for ‘collaborating with Pakistan’. An oft-repeated Kashmiri saying captures this dichotomous relationship between the distressing reality and an empowering desire: ‘Zo jaan wund-ha’ Hindustanus, dil chum Pa’kistanus saeti’ (I may offer my life to India, but my heart will remain with Pakistan).

In the ’90s, when the first mass-based pro-freedom armed resistance started, a new wave of Kashmiri nationalism captivated public imagination. It demanded total independence from India and Pakistan, and floated a proposal for an independent Kashmir. The idea of an unhyphenated Kashmiri identity, independent of any patron or overlord, had a very potent appeal and currency. But that is in the past now.

The mass uprisings of 2008 and 2010 slowly but certainly brought back the idea of Pakistan as a strong alternative to the oppressive Indian control. This was ironic because both these uprisings received no support from Pakistan, not even the worn out and customary lip service that usually reiterates “continued moral and diplomatic support for the Kashmiri freedom struggle”. Under relentless American pressure and mounting domestic challenges, Pakistan had not only abandoned the so-called ‘principled position’ on her once designated ‘jugular vein’, but also actively intervened to block any public discourse on Kashmir’s sufferings. As the Kashmiri youth were being ruthlessly butchered in the streets of Srinagar and elsewhere, Pakistani mass media chose to drown their agony by increasing air time for noisy Bollywood albums.

These blatant betrayals and a complete U-turn on the Kashmir issue by the Musharraf regime earlier should have buried all the vestiges of the idea of Pakistan. But that did not happen, nor did the repeated flow of bad news ranging from terrorism to economic decline and political and religious polarisation to deterioration in Pakistan’s regional and international standing. Despite the concerted effort of several Indian security agencies to drip feed Kashmiris with cleverly packaged bad news on Pakistan through its sponsored local media outlets or insidious propaganda using the jingoistic national Indian media, nothing would estrange Kashmiris from Pakistan.

In fact, years of this unremitting massive campaign, which interestingly is not false on most of the facts, has had a completely opposite effect. If the current uprising is any indication, the love, affection and yearning for Pakistan has reached unprecedented levels.

In the past five weeks, I have noticed thousands of youth in scores of public demonstrations madly eulogising Pakistan through fanatical delivery of supportive slogans and obsessive display of the green with white crescent flags. In one of the massive public demonstrations at the Jablipora village of Bijbehara where more than 20,000 men and women participated in the ‘azadi rally’ scores of youth used Pakistani flag as a ‘musalla’ (prayer mat) during the dhuhr prayers. This is an ultimate act of devotion with sacred connotations, breaching the narrow confines of politics.

It is not uncanny for the people on their deathbeds to proclaim their love for Pakistan. There is an endless supply of stories about dying neighbours, relatives or acquaintances who enjoin their loved ones to shout out loud at their graves “once Kashmir becomes a part of Pakistan”. Despite Pakistan’s consistent betrayals and failings, such an unconditional love and affection seems pure lunacy, but it remains prevalent and relevant in Kashmir.

The writer is a journalist, author, and a communications and security specialist. He lives between London, Lahore and Srinagar, Kashmir, where he is currently stuck. Twitter: @murtaza_shibli

69th anniversary: Residents of twin cities gear up for celebrations