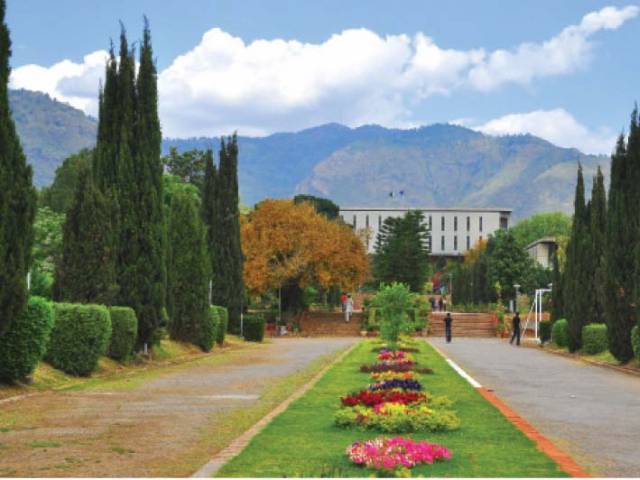 Quaid-i-Azam University has been one of the leading university in Pakistan. PHOTOS: EXPRESS

ISLAMABAD: The Quaid-i-Azam University, which is celebrating its golden jubilee this year, has since 2007, been one of the top-ranking universities in Pakistan, as per the Higher Education Commission (HEC) rankings.

It has continuously been featured among the top ten institutes, and has also ranked at number one multiple times.

It has four departments and nine affiliated research institutes and has had a spot in the top 500 universities of the world, as per the Quacquarelli Symonds (QS) ranking.

It has been continuously ranked between 501 and 600 globally by the Times Higher Education World University rankings, as well as having been counted as one of the 120 best universities in Asia.

It has also completed 1,018 research publications in impact factor journals during 2015.

Starting with only four departments, the university now has 31 departments and six federally-funded autonomous centres on the campus.

This is despite the fact that the institute has been plagued by a multitude of challenges.

The QAU Vice-Chancellor, Dr Javed Ashraf, while talking to The Express Tribune on the occasion of an event marking university’s golden jubilee, cited lack of fundraising as the biggest challenge facing the institute, and expressed his concern over the shortage of financial resources.

On this note, he encouraged prominent alumni to help the university in fundraising, to salvage the institute from the financial crunch.

The university has also been facing land encroachment issues.

Despite having paid for a total area of 1,700 acres, the university only occupies 1,500 acres, said an official at the campus, who requested not to be named.

He said that the university had been unable to recover the remainder of the land, as the government had not demarcated its boundary.

The official then revealed that the dispute was primarily with the Pakistan Institute of Development Economics (Pide).

The university has seen better days. Alumni reflected on how the social, political and economic environment was much more liberal and congenial in the 1970s.

“There was no gender bias or segregation, and students were very accommodating towards each other,” said Sikandar Ahmed Rai, an alumnus.

The university degree was multi-disciplinary, and students could enroll for classes from other departments, he said.

The central, as well as departmental libraries remained open 24 hours, for all students, regardless of gender, said another alumnus.

Another former university student reminisced on how the faculty came from every corner of the world, adding that professors and scholars from Columbia, Pennsylvania, and Hyderabad University used to teach them.