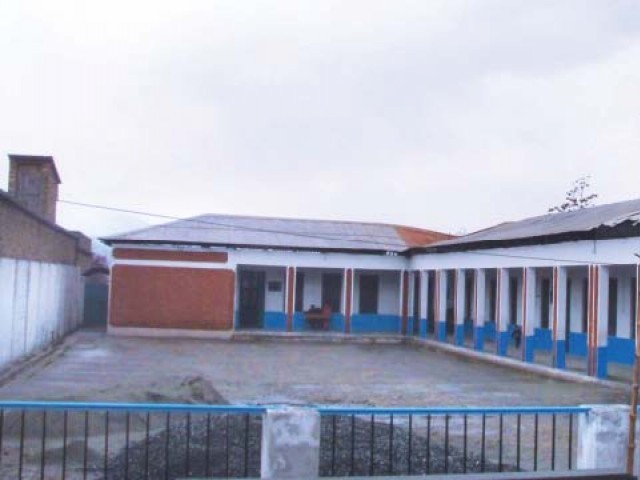 Part of the Government Girls High School is back up and functional again (above), other parts are in use, though not quite finished (right). PHOTOS: FAZAL KHALIQ

SWAT: Government Girls Middle School Sambat Matta was one of the more than 400 schools destroyed by militants during the Taliban’s short reign in Swat.

After the violence in the area subsided, it was the women of the region, with their love of education and desire to break the glass ceiling and face the world, that spearheaded the revival of education in the region.

A training session was recently organised by the Parents Teacher Council and arranged by Sarhad Rural Support Programme (SRSP), with funding from the UK’s Department for International Development.

Jamila, one of the many teachers who attended the event, said that the girls middle school in Matta was one of the leading schools in terms of test scores and achievements. But after the Taliban took over, the school had to quickly shut down.

She said, “The day those masked men came and torched the school was one of the worst days of our lives, we are thankful to the local community and the Pakistan Army for rehabilitating the school.”

But there are still many challenges.

“The school’s ceiling has not been restored so we are disturbed by sounds from neighbouring classes,” Jamila added.

Nusrat Begum, another teacher at the same school recalled life during the operation, “We were horribly scared by the insurgency and thought our homes would transform into our graves under the rain of mortar shells. The normalcy we now enjoy is a dream compared to those days.”

A young teacher, Saeeda, told The Express Tribune, “Getting an education was my passion, my father fully supported me and always encouraged me, but personally, I am not satisfied with what we have right now.”

Regarding local support for the Taliban, she said, “Women of the area did not support them, unlike some people in other militancy-affected areas, we loved education and love it even more now.”

Narrating a personal experience during the harsh Taliban rule, Sarwar Begum, a teacher at Government Primary School Mandoor Sambat, said, “I always went to school early because I loved my job. One day, I saw some men with covered faces sitting along my path to school. I rushed back home and informed my brother. He went to the Taliban commander to complain, but the commander bluntly told him to stop me from going to school.”

SRSP will rebuild 40 schools in Swat, according to the programme’s Education Coordinator, Murad Ali. He said that SRSP had already selected 33 schools for reconstruction. Of these, pre-fabricated structures for 25 schools were already being prepared, Ali added.

“We have completely involved the local community. During the first phase we are mobilizing and reactivating the Parents Teachers Councils and training them,” Ali said.

He added, “We will streamline educational activities for militancy-affected children by conducting psycho-social activities (activities aimed at easing resumption of ‘normal life’ and preventing the onset of mental disorders like depression and post traumatic stress
disorder) too.”