May takes first step to Brexit ahead of Merkel talks

May takes first step to Brexit ahead of Merkel talks 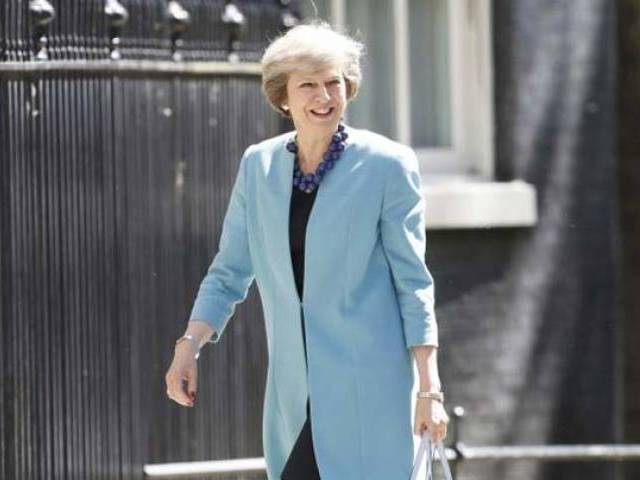 LONDON: Prime Minister Theresa May took the first step towards Brexit on Wednesday by relinquishing Britain’s presidency of the European Council, ahead of her first meeting with German Chancellor Angela Merkel.

Britain will no longer assume the six-month rotating presidency next July as planned, choosing instead to prioritise negotiations on implementing last month’s shock referendum vote to leave the European Union.

The decision was announced just hours before May, who took office one week ago, makes her first foreign trip with a visit to Berlin for a meeting and working dinner with Merkel.

Officials said May will repeat her call for patience as her new government works out what it hopes to achieve after ending its 43-year-old membership with the bloc.

“I am determined that Britain will make a success of leaving the European Union and that’s why I have decided to visit Berlin and Paris so soon after taking office,” May said in a statement.

“I do not underestimate the challenge of negotiating our exit from the EU and I firmly believe that being able to talk frankly and openly about the issues we face will be an important part of a successful negotiation.

“I also want to deliver a very clear message about the importance we attach to our bilateral relationship with our European partners, not just now but also when we have left the EU.”

Key sticking points in the Brexit negotiations could be freedom of movement and the timetable for triggering Article 50 of the Lisbon Treaty, which starts the two-year countdown to Britain’s formal departure.

May spoke to European Council president Donald Tusk on Tuesday, where she informed him of her decision to give up the rotating presidency.

Belgium was quick to put itself forward as a replacement, and EU ambassadors were due to meet later in Brussels to discuss the issue.

Britain’s new foreign minister, the leading Brexit campaigner Boris Johnson, held his first talks with his EU peers this week in which he urged the bloc to leave the doors open to the UK and promised the country would continue to play a “leading role” in Europe.

May is likely to have an easier ride with Merkel than with France’s Socialist leader, although both have their own domestic election cycles to think about.

“May has to build bridges with her fellow leaders,” Professor Iain Begg, from the European Institute at the London School of Economics university, told AFP.

“It will be getting to know each other combined with trying to put positions on the table.

“May has this reputation as a tough negotiator who says what she wants and wants what she says. She will be anxious to convey that she’s not a soft touch.”

Commentators have drawn comparisons between Merkel and May: both pastors’ daughters with low-profile husbands, no children and a love of Alpine hiking, who rose to become leaders of centre-right parties.

While some EU countries want Britain out of the bloc as soon as possible, the German leader has called for patience.

However, she has also warned that Britain cannot have continued access to the single market while restricting the freedom of EU citizens to emigrate to Britain — the key issue in the June 23 referendum.

“In politics, it is always better to take a deep breath and only then begin dialogue with others,” German President Joachim Gauck said in an interview with the Bild newspaper published on Wednesday.

He said punishing Britain in the negotiations “would not be the right path to follow for future generations”.

But Hollande has a presidential election looming in April and is coming under pressure from the far-right National Front, which wants France to leave the EU too.

“For Hollande there is manifestly a concern about Brexit contagion to France,” said Begg.

“He will want to impress upon May that she cannot string this along indefinitely or expect great gifts from France because Hollande has domestic politics to think about and he will want to avoid ‘encourager les autres’ (encouraging others).”