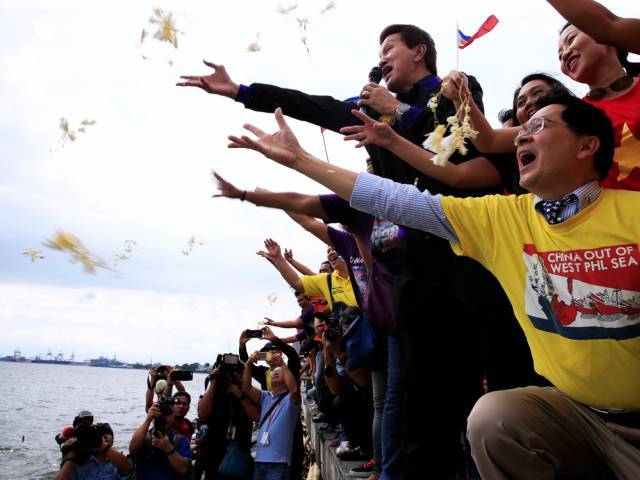 Protesters throws flowers while chanting anti-Chinese slogans during a rally by different activist groups over the South China Sea disputes, along a bay in metro Manila, Philippines July 12, 2016. PHOTO: REUTERS

THE HAGUE: An international tribunal on Tuesday ruled against China in a bitter row over territorial claims to the South China Sea that is likely to ratchet up regional tensions.

“The tribunal concluded that there was no legal basis for China to claim historic rights within the sea areas falling within the ‘nine-dash line’,” the Permanent Court of Arbitration said in a statement.

All eyes were watching for reaction from the Asian political and military powerhouse, which had fired off a barrage of criticism even before the decision by the PCA in The Hague was announced.

China asserts sovereignty over almost all of the strategically vital waters in the face of rival claims from its Southeast Asian neighbours.

Manila had lodged the suit against Beijing in 2013, saying that after 17 years of negotiations it had exhausted all political and diplomatic avenues.

Beijing waged a months-long campaign to discredit the panel, which it says has no jurisdiction in the multinational dispute, and it refused to take part in the case.

The state-run China Daily topped its front page with a picture of Woody Island in the Paracels, emblazoned: “Arbitration invalid”.

Ahead of the decision, new Philippines President Rodrigo Duterte had signalled he did not want to antagonise China, saying he would not “taunt or flaunt” a favourable ruling and would seek a “soft landing” with China.

China’s claims were first enshrined in a map drawn in the 1940s with a nine-dash line stretching south from China and encircling almost all of the sea, although it says Chinese fishermen have been using it for centuries.

To bolster its position it has rapidly turned reefs into artificial islands capable of hosting military planes.

It has held naval drills between the Paracels and the southern Chinese island of Hainan in recent days.

US naval destroyers have been patrolling near the Chinese-claimed Scarborough Shoal and Spratly Islands, supported by aircraft carrier USS Ronald Reagan, the US-based Navy Times reported.

Chinese state media have said Beijing will not take a “single step back” after the ruling, and President Xi Jinping said earlier this month that China would never compromise on sovereignty, adding: “We are not afraid of trouble.”

Manila lodged its suit against Beijing in 2013, saying China was in violation of the UN Convention on the Law of the Sea (UNCLOS), to which both countries are signatories.

One of the key issues was whether the land features in the area are islands capable of supporting human habitation — which under UNCLOS are entitled to territorial waters and an exclusive economic zone — or rocks, which only have territorial waters, or low-tide elevations, which get neither.

If none of the outcrops are islands, then none of the claimants to them would gain sole rights to major expanses of the waters around them.

“The ruling can reduce the scope of the South China Sea disputes, but will not solve them,” said analysts Yanmei Xie and Tim Johnston of the International Crisis Group in a report.

The ruling was likely to “escalate the war of words”, they said, but added: “Escalation to military standoffs is not inevitable.”

China could choose to withdraw from UNCLOS, or begin building on Scarborough Shoal, which Washington would view as a provocation.

Beijing could also declare an air defence identification zone over the South China Sea, claiming the right to interrogate aircraft passing through the airspace, or try to remove a ship grounded by the Philippines on Second Thomas Shoal for use as a base.

Alternatively, it could move to reduce tensions.

The Philippine embassy in China has warned its citizens to beware of personal “threats” and avoid political debates.

Nationalist demonstrations are not rare in China, sometimes apparently with the tacit backing of authorities.

More than 20 Chinese police were positioned outside the Philippine embassy on Tuesday, with more in vans nearby — a significantly larger presence than usual — along with two lorries loaded with crowd control barriers, a possible indication that authorities expected protests at the building.

China “does not accept and does not recognise” the ruling by a UN-backed tribunal on its dispute with the Philippines over the South China Sea, the official Xinhua news agency reported.

The comments, in a brief dispatch that did not identify a source, follow a ruling by the Permanent Court of Arbitration in the Hague that China has no historic rights to its claimed “nine-dash line”.