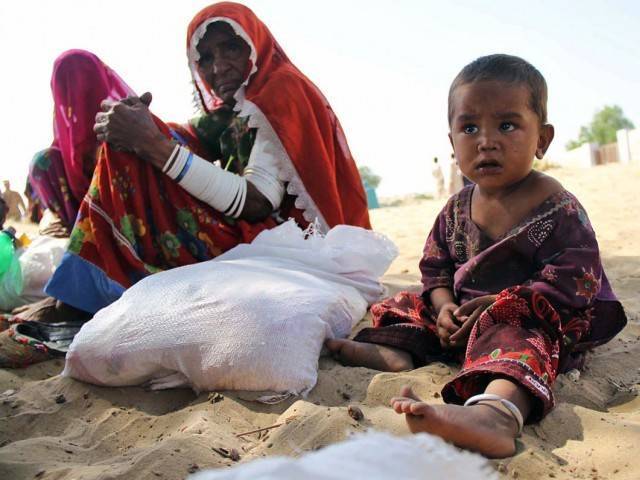 Poverty in Sindh’s capital stood at 4.5% in 2014-15, decreasing the poverty ratio for the province as a whole. In, 10.5% of Karachi’s population lived below the poverty line. PHOTO: ONLINE

ISLAMABAD: Recent floods, coupled with egregious governance, have worsened living standards in Sindh where 75% of the population in rural areas is now living in abject poverty.

The overall poverty ratio of 43.1%, compiled by aggregating figures from urban and rural areas, does not actually convey the real picture of Sindh most of which is rural.

The province has been categorised second poorest after Balochistan among all the provinces and regions of Pakistan, excluding the militancy-hit Federally Administered Tribal Areas. Balochistan’s 84.6% rural population lives below the poverty line, according to a United Nations report.

The statistics revealed in the recently released study on multidimensional poverty in Pakistan were discussed at length at a seminar organised by the UN’s Food and Agriculture Organisation (FAO) and International Labour Organisation.

The UN report for 2014-15 titled “Multidimensional Poverty in Pakistan” shows poverty in urban areas of Sindh at 10.6% but an alarming 75.5% in rural areas, which constitute a major chunk of the province.

The figures have been calculated with a new methodology. They cover education, health and standard of living as indicators for measuring poverty. Traditionally consumption or income level was taken as base to the count.

Few districts in Sindh have seen progress in alleviating miseries of people. Some showed a slight improvement one year but the situation deteriorated the next year. A slight change in weather or an untoward incident pushes the people back to extreme poverty.

Statistics for Nawabshah, Naushero Feroz and Mirpurkhas also show similar trends. However Jamshoro is among a few districts witnessing a steady improvement over the years.

With better job and business opportunities, Karachi maintained its reputation as the ‘mother of the poor’. Poverty in Sindh’s capital stood at 4.5% in 2014-15, decreasing the poverty ratio for the province as a whole. In, 10.5% of Karachi’s population lived below the poverty line.