In a touchi­ng tribut­e, two artist­s teamed up to paint a beauti­ful mural of the qawwal on a wall in Korang­i
By Sunehra Mehmood
Published: June 27, 2016
Tweet Email 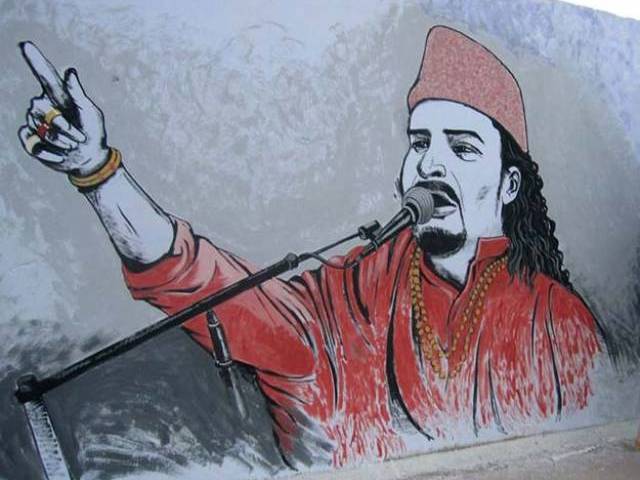 In a touching tribute, two artists teamed up to paint a beautiful mural of the qawwal on a wall in Korangi PHOTO: S. M. RAZA/FACEBOOK

In death as in life, Amjad Sabri left his mark on thousands of hearts. The whole country is mourning the loss of a man who was an ambassador of peace and a sufi qawwal who meant no harm to anyone.

In a touching tribute, two artists, S M Raza and Aqib Faiz, teamed up to paint a beautiful mural of the qawwal on a wall in Korangi. “A group of friends were planning to make a Wall Of Kindness in Korangi number 5. One of them said, ‘why don’t we paint something here?’ Another said, ‘Amjad Sabri!’ And I said, ‘A tribute to Amjad Sabri.’ And we started the next day (Sunday). It was a very quick mural painting by myself and Aqib Faiz,” Raza said while speaking to The Express Tribune.

Strings look back at last interaction with Amjad Sabri

The University of Karachi graduate, who was also a visiting faculty member at Indus Valley School of Art and Architecture and worked as an illustrator at Sonya Battla, said everyone is still in a state of shock over the killing of Amjad Sabri.

“He is not among us anymore but his voice will echo with our heartbeat,” Raza said. Sabri was shot dead by two motorcycle-borne gunmen, hardly a kilometre away from his home in the Liaquatabad neighbourhood of Karachi on Wednesday. 8 performances by Amjad Sabri that will leave you spellbound SMS NADRA to get your CNIC, family tree re-verified