Young stuntmen put their lives and others in danger

Young stuntmen put their lives and others in danger

A number of young people have lost their lives while doing wheeli­e
By Mudassir Raja
Published: June 27, 2016
Tweet Email 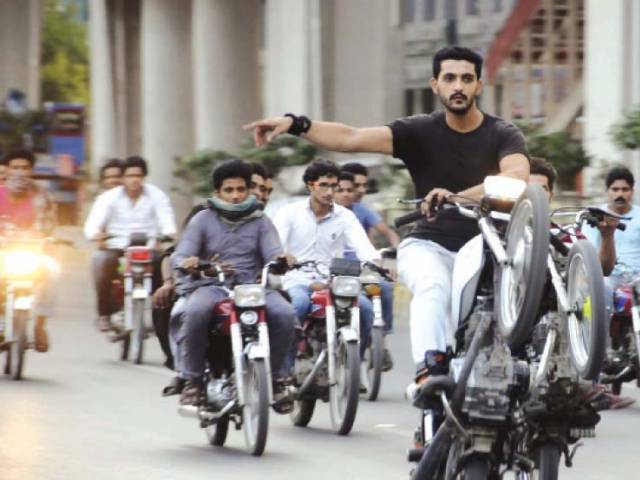 Youth enjoy a wheelie in Rawalpindi on Sunday. PHOTO: PPI

RAWALPINDI: Wheelie by young bikers continues on major roads in the city at nights, especially during Ramazan, endangering their lives as well as others.

A number of young people have lost their lives while doing wheelie recently.

Bikers in squads race and do the wheelie on Benazir Bhutto Road, formerly Murree Road, throughout the night till Sehri, he added.

Wasif who is a cloth merchant doing business at Raja Bazaar said that during Ramazan he had to come home late in the night and often witnessed young people, mostly teenage boys, doing the wheelie and racing on the road.

He said that the young bikers always put their lives in danger. The stuntmen prepare special bikes for wheelie and racing. The bikes are modified to keep balance on rear wheel without minimising the speed.

“Young boys interested in wheelie remove many parts of their bikes. They remove the front and rear mud guards, speedometer, indicators, and often headlights to minimise its weight and to improve its efficiency”, said Muhammad Miskeen who works in a motorcycle workshop near Liaqat Bagh.

There are reports that some people are involved in betting on the stunts and racing on motorcycles. Involvement of money further pushes young men to take part in a wheelie.

Motorcycle mechanics are mostly involved in betting and pushing young bikers for stunts.

The wheelie has claimed lives of many young men. On June 18, a young man died after his bike smashed against a pillar of elevated metro bus track.

Adnana Bhatti was working as a salesman in a shop in Saddar. He along with his friend was returning home just before Iftar.

City traffic police, however, believe that they have brought the wheelie under control in the city.

Senior Traffic Police Officer Iftikharul Haq told The Express Tribune that he had formed special squads to crack down against the young bikers involved in stunts. He said that the police had started arresting them and confiscating their bikes.

He noted that in one week the police confiscated over 700 bikes for speeding and wheelie. He noted that the police, however, had decided not to register criminal cases against them and let them go after warning.

The CTO said that the police had to handle the speeding bikers with care because if the police chased them, they could be hurt in an accident. The police, however, had registered criminal cases on charges of rash driving and misuse of a motorcycle against the young men arrested second or third time while doing the wheelie.

“It is the duty of the parents to make their sons aware of dangers and risks involved in doing wheelie and racing. The stunts put their and others’ lives at risk”, the police officer said.